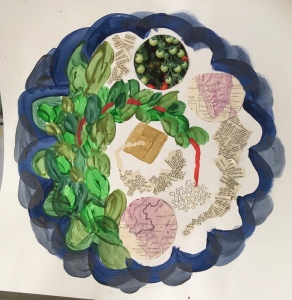 So I was at the monastery when the pandemic began.  I had arrived the day before, settled into my room in the tower, with two high windows showing small homes in Atchison, and the other showing the red brick and greened copper points and trim of the chapel.  I read and read and wrote, skipped prayer and ate a dinner of leftovers, rather than expose the sisters to my germs in the chapel and cafeteria.

I made my usual pilgrimage to the library.  They do have a computerized card catalogue now, which is kind of tough to take. In addition to their collections of spiritual and religious texts, they also have an interesting collection of self-help, psychology, and history books, with plenty of old titles.

I chose a book on Carl Jung and Teresa of Avila (our subject for the next day), some books on healing, and a book about The Plague.

I’m kind of into woodcuts now.

The plague was way, way worse than what’s happening now.  That also made me feel good.

As an American, I have often felt the loss of a long, boring history of ancestors dealing with every possible kind of shit.  Immigration often cuts us off from this.  Knowing people dealt with awful shit and just went on about their days helps me.

Sir Isaac Newton had some of his greatest discoveries while outside London avoiding the disease.  Samuel Pepys wrote a diary that is our greatest source of information about England at that time.  If you think your daily life isn’t interesting, you’re wrong.  What time Pepys got up, what he ate, and how his cat woke him up (among other things) made him famous.

Sadly enough, Italy was the center of disease at that time, too.  Italians got around, and it was warm.  They built the first quarantine structures on the edges of cities.  They raised taxes to get money to buy food for those who were ill.  Otherwise, the ill might come into town.  Rich people left early and often, leaving the tax base somewhat shaky.

Public health became a thing that governments did.

I was not sure I should have looked at that book, but I peacefully went to sleep.  There isn’t anywhere in the world that feels safer to me than the monastery.

In 1348, Bernard Tolomei led his group of Benedictine monks in caring for the sick in Siena.  They left their country monastery to go into the city to help.

In 1260, Around this same time, Europeans started whipping each other, and themselves, in the hopes of punishing themselves so God wouldn’t have to punish them with the Black Death.  One group of traveling flagellants was 2,500 people.

Let’s not do this.

There was also an increase in anti-Semitic attacks.

Let’s not do that, either.

The need to know where the plague was, and how bad it was, led cities to require deaths to be registered.  These are invaluable records when studying those time periods.

All of Thursday was a workshop using art to open us to God.  We painted, did movement exercises that were nearly impossible for white people, played instruments, and wrote.  Obviously I loved it.  There were six of us, all women over 40, and someone was playing soothing music and giving us time to make art.

When the workshop was over, I cleaned out my room and headed out.  I had a gorgeous painting, the Jung/Teresa book to keep reading at home, and a sense of peace that they manufacture up there and export.

So when I got home and gave myself time to read the NYT and WaPo and CNN, I was less freaked out than I might be.

I did start to get panicky at the end of the workshop.  One woman shared that someone close to her had recently committed suicide.  I felt the information shake me, and I realized I had missed my dose of anti-anxiety med.

Though it interrupted, I ran out to my car to get the pills.

They worked.  They don’t make me sleepy or carefree, they just make me like a normal person who is anxious.

Some people think the plague caused the Renaissance.  That after getting so kicked in the head by God, Italians were ready to focus on the here and now, and set God aside for a bit.  Maybe.

Leo Tolstoy, one of the best writers on our planet, wrote, “Many people worry and suffer because they have been involved in so many bad things in their lives.  In truth, though, good things often happen in spite of our wisdom, and sometimes even in opposition to our wishes, and after our excitement and suffering over unworthy things.”

Will this be, is this, an unworthy thing?  I don’t know.

I know I love how Tolstoy tells me, “You don’t even know, man.”

I know it is an opportunity to observe gravity, write a book, spring clean the shit out of things you’d never otherwise get clean.

I have been hoping that the 2020 election will be a renaissance.  A time to step forward and shake off some of the hate and anger that has led our national government these last years.  I didn’t need to go any deeper into darkness, but here we are.

Image: the picture I made.  Yay!