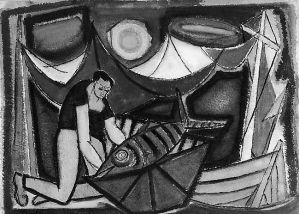 The way places live in me is that I see and feel a flash of a spot.  The subway exit in Park Slope with the store where I bought ping pong balls, and the pizza place I ate a couple of times.  I walked up the steps, and the dollar store emerged.  The feet ahead of me.  The backs of people.

The tunnel transferring at Union Square, from or to the 3/4/5.  White tile forever.  The incense selling table.  Or a comic book table.  A movie with a scene on the subway, and that’s where I am.  There.

Or on the godforsaken 6 platform at Union Square, where the tracks curve and the platform does that crazy bridge move.  So loud.  So hot.  Likely a gateway to hell.

The station at 72nd on the west side, where I went through on my way to the psychiatrist with the black dog and the plastic covered floors.  Lots of glass, open as subway stations rarely are.  It had a pleasant feeling, like here comes my drugs that help me function, and the history of the west side, too, scruffy, cheerful.

A corner across from the cemetery Pere-Lachaise in Paris, I remember my hands being so, so cold.  There was a restaurant there.  This is something I saw only once, fifteen years ago, but I have a mental snapshot.

The square in Brooklyn where that one theater was, an old theater I only saw one movie in, and the movie was “Her,” and it made me quiet and open for a long walk home.  Sometimes my friend Michael drove me past it, when he took the very, very long way, driving me home.  It was such a novelty to be driven in New York City, I didn’t mind.

Not even, really, significant places.  One of the corners by Bryant Park, with a nondescript bank, and scaffolding.

The bagel place in Crown Heights where I never once went.  It was always too crowded, and too many white people.  There’s no reason for me to remember it.  The decor was all black and white.  It made me think about how I like butter on a toasted bagel, and how that is some heretical shit.

The escalator at Broadway Junction in Queens.  A long ride, past ’60s style stained glass windows.  A true locals only, and annoying spot, that.  The platform there is high up, and rainy and windy and awful, and sometimes the train would appear to be ours, and then not open its doors, and depart, a silent judge.  Nope.

So many of my New York place memories are associated with the subway.  So much of your time, as a New Yorker, you are underground waiting or traveling.

On the sidewalk across the street from my apartment, a bit of industrial glue in a glob, that stayed through rain and snow and ice.

All the times I counted down the blocks to be where I was going, because my shoulder hurt, my feet hurt, I was tired, crabby, broke, wet, on my last nerve.

An Ann Taylor Loft downtown, between my church and the Statue of Liberty.  The little outdoor restaurant on the water, where it seemed no one ever ate.

If I were away from Lawrence, I’d say the religion building on campus, that corner.  The mural and the opening of the door in the back of Aimee’s.

Not places I love, but places I can be, and can feel their way, wherever I am.

New York is a place it is so easy to miss, so hard to avoid seeing it just watching television and movies.

On K-10, the tall cross with the red banner at the Methodist church in Eudora.

Certain times your mind captures, puts in a box, and files away, easy to find, while the fact that my friend sold her CR-V for a Subaru I have, apparently, completely forgotten.

We live in what we have, and we don’t know why.  We don’t know how much we control or decide upon what is significant to us.  What our mind saves because it fits in paradigms already handed to us.  My parents divorced, so I must prove myself loyal.  If I befriend you, I will befriend you and defend you forever.  All data related to me being loyal, or disloyal, goes in a file stored in the front, with clear letters: PROVE LOYALTY AND STABILITY.

I am pathologically late to almost everything, so I also have a big file marked REASONS WHY YOU ARE DISRESPECTFULLY LATE AND DON’T DESERVE LOVE.  That one is overflowing.

TIMES YOU SAID SOMETHING YOU THOUGHT WAS FUNNY BUT IT HURT SOMEONE’S FEELINGS YOU MONSTER.

TIMES YOU SAID SOMETHING WRONG AND MADE YOURSELF LOOK LIKE A DUMMY.  Not as many filed in here, but the ones that are… ooh.

In my elementary school, the steps that went from the primary wing to the upper grades.  There was a turn.  Two flights.  Above hung a little hot air balloon with Snoopy in it.  After our amazing principal left, after third grade, Snoopy disappeared.

There was a lot of “cherish” and “no guarantees” after we learned Kobe Bryant died.  I saw someone had put a “Kobe,” in perfect Helvetica, above a “Bryant Park” subway sign.  That’s the best of New York City.

I wonder if after death, something like the vapors of these places are where spirits are, where energy is, or how we still are, or how we perceive, or experience, or what we leave in the air.  These other levels we live in, dreams more vivid than consecrated realities.