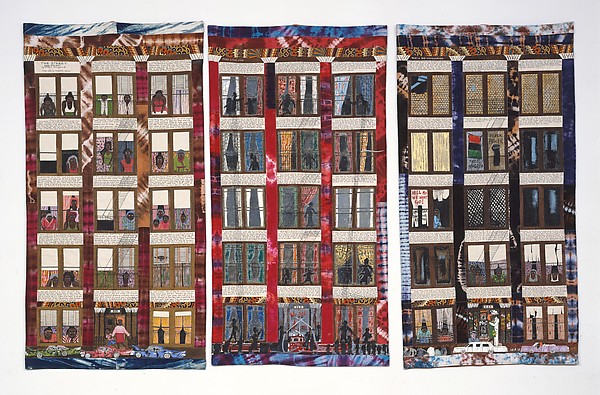 No one gave him $2 worth of change.  An assertive woman in the back said, “Who is she talking to?”  Meaning the bus driver, who is the bus driver asking for fare.  “Get off the bus!” she said.  “I gotta go!”

Finally he got off the bus.  It was impossible to say if he really didn’t have change, or he had forgotten to get change, his affect was flat.

“You weren’t kidding around,” someone told the assertive lady.

I got the date of my move wrong.  I was sitting working with a student on a paper when I realized this.  I told him I had to go to the bathroom, walked upstairs, and called my sister so she could calm me down.

I woke up the next morning and carried boxes of books down three flights of stairs.

This morning I woke up with sore calves.  Not as bad as when I moved out of a fourth-floor apartment into a second-floor one (that day I could hardly walk), but sore.

I lay in my bed and could not avoid noticing that the walls were too bare, that there is a gap like from a pulled tooth, the gap where my great-grandmother’s dresser was.  My dresser since I was seven years old.  And the lamp that was in my room when I was an infant.  They’re all in my dad’s van, which has gone across New Jersey, Pennsylvania, is now in Ohio.

My dad, my stepmom, and I ate at my cafe, looked at Alexander Hamilton’s grave, and saw a display of quilts made by military tailors, out of military uniform fabrics.  The guard at that museum said, “What are you resisting?”

My roommate knocked and hugged me while I cried some more.

And in the morning, the snow I had ordered, as from a  catalog, a thing that used to exist as something we children looked at, and could never order from, but cut pictures out of, and desired things we would never get, like American Girl dolls, and things we would get, like clothes from Sears.

The snow delivered.  But why, where had it come from how was it December, how was it my last week in New York, how was it Christmastime, after all those times I stomped home certain no one cared for me at all, ready to buy a ticket back home and show everyone that I had given up.  Look!  I gave up!

The tickets were always expensive.  I always found a reason to stay, even if it was just that I was too tired to take action.  Even if it was only that I wouldn’t leave my great-grandmother’s dresser.

It snowed and it covered everything, my grief at leaving, my latest attempt to die to one life and move into another, my beautiful times with strangers and people who were immediately friends, and people who were slowly friends, and people who betrayed me, and people who had visited me in New York, giving me a concentrated, adventure kind of friendship that I wouldn’t have had otherwise.  It snowed on Battery Park, where I went to art events and protests, on Liberty Island, where I took many visitors, on Melville’s streets, downtown, it snowed on the top of the Empire State Building, where my cousin and I had looked over the grid.  It snowed on Crown Heights, the part around the Nostrand 3 stop, and I remember going to that stop the first time and thinking, “This is my stop.  I have a stop in New York City.”