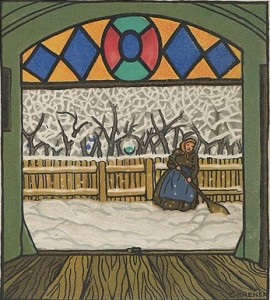 You will see, on beginning to read this letter, that it is not addressed to you by name. But I address it to a woman–a very young woman still–who was born to be happy and has lived miserably; who has no prospect before her but sorrow….

Do not think that I write to you as if I felt myself very much above you, or wished to hurt your feelings by reminding you of the situation in which you are placed. God forbid! I mean nothing but kindness to you, and I write as if you were my sister.

One of my students bought me a doughnut.  My students now are kids in foster care.  I had to take the doughnut.  It would have been so rude not to.

“Is it going to be all right?” people are frequently asking each other now, me with my family in the car, as we throw conversation quickly around, me with a friend over wine, me with roommates standing in kitchen.  Is it?  With this mentally ill guy as president elect?  Could it be okay?

With our enthusiastic response, we have beaten some of it back.  Our donations, our phone calls, our emails, and even, sometimes, our Facebook conversations.

It’s still a horror of a time to be a woman.  To have a president who thinks it’s all right to rate you like a show dog.  I’m too old, too flat-chested, too skinny, spider veins, forehead wrinkles, and I am perfectly happy to be a complete bitch if necessary.  The president elect hates me.

I am only worth as much as my ability to arouse men and make them feel all right about their own resources and abilities.  The men in my life have tried valiantly to protect me from this reality of our culture, but it’s alway been running in the background.  I knew.  I always knew.  I carefully protected myself from it, by wearing very baggy clothes through puberty, by keeping all men at a very careful distance until I knew I could trust them.  I still knew.

Dickens helped found a home for women who had been in prostitution.  He chose the house, had it decorated, and wrote a letter to give to women who were possible residents.  Over twelve years, scholars estimate that about half of the women who lived there were able to make new lives.  Today on that site, there is a homeless shelter.

The women were not fallen, of course, it was society who had thrown them against a wall.  Our country is not fallen, but it has been thrown, hard, and broken.

I lay on my belly on the rug and a kid taught me to play Pokemon.  I was babysitting.  I was a terrible and wonderful opponent because I didn’t really understand the rules, and I was happy to lose because I only care about impressing people with how witty I am, how well read, and how tall, and none of these attributes of mine were at stake in Pokemon.

For a second, lying on the rug, I thought, I live in Brooklyn, and I am in Brooklyn lying on a rug.  When you’re at someone else’e house and they trust you with their kid, you really live somewhere.

My niece called me.  She’s at an age she just likes to call people and talk to them, it doesn’t seem odd to her that we haven’t seen each other recently, because she lives so far away.  She just wanted to show me her dogs, and I showed her my cat.  I asked her what she got for her birthday, which was just last week, and she said, “Oh, I don’t remember.”  That was great.

For many years, at Christmas I was terribly sad that I did not have a family of my own.  I was terribly empty at not having a man to have a romantic Christmas moment with, or any kids with stockings to fill.  It made me so sad I didn’t want to do some Christmas stuff.  I don’t feel that now, this year, I just feel happy to have Christmas, to have pretty things, be with people, I don’t imagine some other life where my husband and kids were there when we decorated my dad’s tree last week.  They aren’t real, and the people who were there made me happy.

Some burdens just ease themselves off you, over time.

Right now we bear a heavy burden, of worry about the stability of our world, of worry about are we doing enough to protect our republic, our people, and that panic is very well-founded and realistic.

It won’t be forever, though.

Christmas is a break, for me, anyway, I hope it is for you.

I open Christmas in its secular sparkle, for all of us, for Charles Dickens, for tradition, for small affordable presents that you are afraid aren’t right, but are fine, what are you trying to prove?  For warm drinks, for pine, fragrant and sharp, for candles, for the moment you’re on your last nerve because of the special shit you gotta do.

I know it is only Advent, but this is the Christmas I believe in, which is inspired by Christianity and not limited by it, nothing beautiful is limited.  Loaves and fishes Christmas.  For everyone, no demand, no questions.  Plenty, plenty, enough to get through the winter.

Mankind is our business.

…remember on the other hand that you must have the strength to leave behind you all old habits. You must resolve to set a watch upon yourself, and to be firm in your control over yourself, and to restrain yourself; to be gentle, patient, persevering, and good tempered. Above all things, to be truthful in every word you speak. Do this, and all the rest is easy.

Believe me that I am indeed,

3 thoughts on “Your Friend”