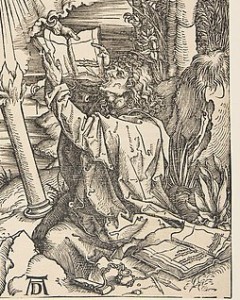 I was caught unawares that I was leading the service, not just helping, and it was with a “Page 115,” that I opened a prayer book and got the show on the road.  When it was time to get the bread and wine, though, again I forgot it is stashed in the gold cabinet, and had to be hissed at not to take the stuff waiting for tomorrow.  In a nice, quiet way.

Then I went on to write, and while I was writing, I got a message that a friend from church in Kansas City had just died.

What the hell is God ever thinking?

I have not taken my usual period of head-clearing before beginning a new novel.  I don’t know if this is being older, being deeper in my work, or that the last one I spent an extra long time on.  This time I’m awfully quickly buying a blank book, filling it with quotes and lists of things that interest me, finding new pieces of art (Gauguin woodcuts) and stories (Jonah) that will obsess me and tell me how to write this new book.

Every few months I browse adoption websites and then think three things: I can’t possibly become someone’s mother, I can’t possibly not become someone’s mother, and this means I am really, really giving up on this husband business, like I say I have given up, but really giving up is another step of real, that is serious.  Not that this is really me, it is also calendar time.

Caroline was one of our cadre of evening service people at the cathedral.  She and her husband were both teachers, of different sorts, and great liberals and active and thoughtful and two of the people I first met there who made me know I fit in great there.  Also, once, when they had first met me, they invited me to Thanksgiving dinner.  They are the only people who have ever invited me to Thanksgiving dinner, a through-the-looking glass thing for me, as I am way overfamilied and love the shit out of my huge family holidays, but what if I wasn’t?  I would have had a place to go.

Caroline had survived many years of urban teaching and was clearly still sane and could have a laugh.  She worked somehow with the pension and retirement stuff, after her retirement.  It is true that teaching seems to be becoming a profession only young people will do for a few years before moving on to “better” jobs, partly to save us money, partly to make teachers compliant, because new, young people are.  Caroline is one of the people who showed me urban teaching as a full, long career.  She taught at a middle school in the city.  We could swap war stories.  And we did.

She and her husband were always bicycling somewhere, in the city, out of town, overseas.  Every other time I saw them, they had just gotten back from some magnificent adventure, biking across Vietnam, that kind of thing.  They helped people, they worked with Habitat, the city, the world, was clearly better for them being in it.

The message I got was that she got cancer, and it was quick.  I was not at the cathedral to hear, but I was at another church at another evening service, lighting the candles, filing the chalice, folding the white cloths with embroidered red crosses, washing the chalice, drying it, putting it back in the closet.

I was out of it, leading the service, I hardly remember what happened, except that I chose my favorite closing prayer, the thanksgiving, even though we had already done a thanksgiving.  And I read from Jeremiah.  I should take it back.  The thanksgiving.  Instead, I did it twice.

I want to go back to the cathedral when I visit at Christmas, and have everyone be there.  There are other people I worry about.  Churches have a high percentage of older people.

Most of my fiction starts with some Biblical foundation, though it usually doesn’t show at the end  Jonah is a little like Job, but with gags, and much shorter, with an ending so abrupt I thought at first someone had made a mistake.  “When God saw what they did and how they turned from their evil ways, he relented and did not bring on them the destruction he had threatened.”

According to rabbinic tradition, Jonah refused to pray for the three days he was inside the fish.