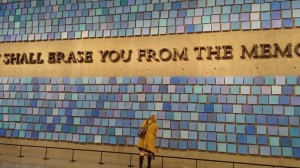 I turned thirty-nine and I went to the September 11th Museum, these two things were somewhat connected, not really, a little.

I was looking back at photos of the mansion and the parties, and I think, did all that happen?  I had this sort of perfect life, not the one I thought I wanted, but, other than being bereft of romantic love, pretty great.  I felt like I could do things.

I turned thirty-nine over pasta alla vodka, a generous pour of Sangiovese, and limoncello impressed upon me by friendly waiters.  I descended into the former foundations of the World Trade Center sober.  The Italian restaurant had warm painted walls, branches of forsythia in big vases, and the museum is all slates and whiteness and one long wall of squares of blue, each beautiful shade of blue you’ve heard of.

Year Three in New York, I think about how still unsocial I am here, but also how much time this gives me to write, and how being here, away from my deeper roots, has gone from being a shellshock of a high strung, where-can-I-rest, I mostly looked forward to sleeping, now a tolerable missing of events and people, thinking forward to seeing them again.  Someday I could again be not someone everyone is excited to see, but just Liz, it’s Tuesday.  And I could again have my own place to live, with all my own furniture and things, where I would entertain, I suppose.  Here people do not so much entertain, here I host houseguests and not parties.

How lonely I would be, instead, for being in a city where art is growing out of the cracks of absolutely everything and to be an artist isn’t a silly, pie-in-the-sky idea, but something many people do, and make a life of, sometimes even a living.  If New York was nothing else to me, it was a city of artists, and it is this, even if I do not have a million new artist friends here, I still feel it, a fistful of great art museums and a wealth of galleries, writers, this place I write where everyone writes so it seems more all right.

No one in Kansas City belongs to a place to write.  You would be alone there all the time.

And I muse, as my job here goes rocky and sour at turns, if I’ll be back, rather competently recrafting a life back midwest, or find some other ledge here to stand on for a little more New York time.

Was it too late to start a whole other adult life, or did I not quite, so much, because I am older and less exploratory, or because I know I have friendships in the bank back there?  I vigorously believe, you can’t do it all, have it all, what is mortality is knowing there are hard choices, and there are so many lives you won’t lead.

I had no interest in, and avoided the World Trade Center, but I was taken by circumstance and it actually felt good to go to a center of suffering, the way Good Friday feels good, a stopping point where you don’t have to pretend to be okay.  Nobody there is okay.  Like Good Friday, though, it is a beautiful place, I mean aesthetically, though the presentation is well done enough, I suppose.

It is still hard to believe that happened.  I took it as an insult against my city, where I had never lived, well, I had lived nearby, for a school year.

I was talking with students about torture today, and all of them said it was okay to torture a terrorist.  “This is new,” I said.  “The United States used to pride itself in not doing things like that.”  Really.  “It was after September 11th.”

“I was five,” one of the kids said.  So it’s a museum now, something that was so fresh and sharp, how could anyone need reminding?

Just as right are the fountains, water on the edges of both the buildings that flows eternally down into the void.  I thought it was just right.  Where did it go?

You have to have a plan, to do anything, but many of the things you thought you would catch and eat turn out to not even live there, and other treats fall in your lap.  I made big art projects with strangers.  I sat and wrote word game stories and read them aloud and chuckled at others’.  Maybe most importantly, I was sure I wasn’t, as an artist, missing anything.  Though I was missing plenty: my sisters’ birthdays, kids on waterslides and getting their faces painted, my friends watching baseball and ordering another round of drinks.

What got me at the museum was a photo of a guy holding up a sign that says, “O +.”  I kept refreshing the New York Times website, every ten minutes, every half hour, to see a story about someone who had been rescued from the rubble, and there wasn’t anyone.  There was nothing that guy could do.  There was nothing to do but put out fires and clean up.

And I was thirty-nine, and you take escalators back up, and for the sixth or seventh time I showed off the New York Stock Exchange, Federal Hall, Trinity Church.