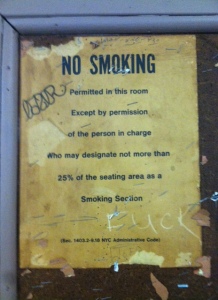 I eased on down the road.  The correct word for my current way of moving, easing.  Yesterday afternoon, after attending a conference I was way too tired to attend and leaving after going to only half the keynote and one session (very pleasant, both), I was walking down New York Avenue, very fast as I always walk, I was thinking about next week being Holy Week, how I was going to spend like every night at church, oh, it was going to be almost too much, as usual, that was what I always loved about it, Thursday, Friday, Saturday at church, oh, the time!  And then I tripped on the sidewalk, not unusual, I thought a second I had caught myself, but I hadn’t, I saw, I had landed on both knees and both hands.

My knees had landed hard, all my weight.  When you have a car accident, you realize the force of traveling even 20 or 30 miles an hour, when something stops you, at higher speeds, it’s unimaginable.  My fast walk into a complete stop on concrete is a hard stop.

I stood up, I realized I could stand up, but I also realized the calm had been knocked out of me, I was shaking, my knees felt empty.  A woman who had been walking behind me said, “You okay,” “Yeah,” I said.

I went to another place to get coffee.

I was not going to travel more than three blocks, no matter my caffeine needs.  Luckily this place was open until 7.  A perfectly nice young man was ordering a macchiato not knowing what it was (it doesn’t matter, it’s too embarrassing a thing to order, they explained it, I was embarrassed for him), and crowing about how great “Eleanor Rigby” was, which shows how young my neighborhood is, and how hateful I am as an old lady, not 87, but, still.  “Eleanor Rigby” was amazing in 1993, when I first found it amazing, and not before, and certainly not now.

My knees feel like when you land wrong, like things are slightly misaligned in there.  I have gotten bruises on both.  If they were more dramatic, I would show you.  I’m disappointed, so far, by their slight size and their unimpressive coloring.  I should have never used all that ice and elevation.  I could have had bruises that show how disabled I feel.

They hurt when I went down the stairs, slowly, slowly.  They feel unreliable.

As I left my building today, after I had eased down all the stairs, I saw my neighbor who has a busted foot and hasn’t been able to work in ages and can’t work and is, I know, up shit creek, rather.  He said, “Next week it’s gonna be better for you,” he meant the weather.  “For us,” I said.  I decided not to tell him I felt gimpy, too.

A few steps further down the street, another guy who was chatting with neighbors, they were all drinking Coronas, said, “I love that coat!  That is so vintage!”  “It isn’t, actually,” I said.  “But thank you.”  “Where you goin?” he asked, and the lady he was talking to hit him to say, Leave the poor white lady alone.  I shrugged like I didn’t know exactly where I was going, gimpy as I am.

I stopped at bar on the way home Friday, read until my eyes crossed, woman next to me asked about the explosion on the East Village, I was reading the paper.  She was a math teacher.  We talked a long time.  She was supposed to teach kids algebra, when some of them couldn’t count by tens.  She loved teaching, but she didn’t know if she was cut out for urban teaching, who is?  It’s insane.  Some of us are just too influenced by inertia to stop.  She was drinking whiskey on the rocks.  I was very proud of her as a human being.  She had a lot to drink.  I got her to have one more.  I didn’t have a lot . I’m 87, you know.

If I had fallen that night, I would’ve been fine.  Falling sober is the dangerous thing.  One knows what one has done.

At the conference I went up to the bookstore to buy a water bottle for my loudest, meanest student.  It was only ten bucks.  He said he wanted to go to that college.  I told him I would buy him a water bottle.  Not as a bribe or anything.  He won’t do any less screaming or jumping or any more English work.  Maybe he’ll feel a little more like a person, though, maybe at some point, maybe in five years, maybe twenty.  I bought two ballpoint pens with the name of the college on them, also.  For myself.

In the classroom where my conference session happened, there was a flyer posted explaining the rules of when you could smoke in the room.  It was a good conversation about teaching writing to boys, but the flyer was honestly the best part, it was a great flyer.

Waiting for the train home, two little girls were playing with their Elsa dolls and singing “Let it Go” over and over.

I got up to my apartment and wrapped scarves around my knees and googled and got the ice.  My cat immediately got into her paid position, comma to my sentence, and we paused.