After I’d made it through Contemporary, I took a set of aluminum stairs that went from the downstairs Pier 94 to the downstairs of Pier 92.  They seemed to be temporary stairs, and the most artistic thing there was the constant tapping of people going up and down, which I though, as I approached, must be some kind of Rube Goldberg thing happening over at that end of the show.

The Contemporary part is what I expected, the Modern half is where you buy a Picasso if you’re the sort of person who can buy a Picasso.  Seriously.  People are sitting chatting with the gallery folk, and sometimes someone is holding a piece up at a distance so potential buyer can see how contrasty that one is, how it would look on his wall.  I didn’t look at anything too long, lest a gallerist say to me, “Can I help you?”  Because, wow, you could not help me.  The only pieces I saw with prices were $50 grand.  Otherwise, I guess, if you have to ask…. 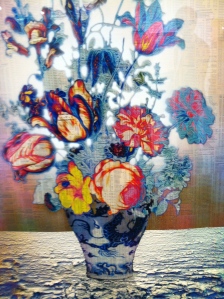 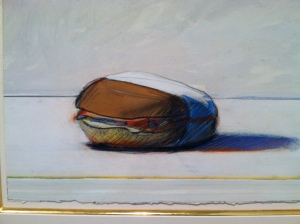 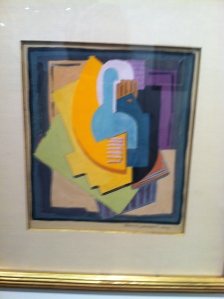 The first flower vase was painted on newspaper, which gave it an interesting sheen that you probably can’t see here.  (Gordon Cheung.)

The second is a Mardsen Hartley.  I have mixed feelings about Hartley.  He’s  from one of my favorite periods in art history, but his big gold-ribbon stuff and numbers are a little smash-your-face-in for me.  Again, my photo of this does little justice to the color, which was screaming like a Van Gogh, and I liked it.  Another guy stopped to look at it the same time I did, both of us intrigued.

Three Wayne Thiebauds next.  I am a fan of the tugboat one in Kansas City, and I like his street paintings, more than the food ones.  This little barbecue sandwich was very cute, though.  Even better were the candy sticks, which I thought were rolls of wallpaper.  Either way that one is a kick in the head.  I could look at it for hours.

They had a lot of Calders, including this red and blue one, which was a tapestry he designed on commission, for the occasion of America’s bicentennial, aka, the year of my birth.  It was commissioned by a Saudi.  There must be a  story there.

The last is by Blanche Lazzell, and will only set you back $48 grand.  There were affordable pieces, see?