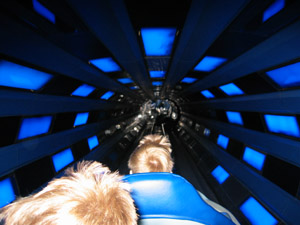 Space Mountain, Disney World (preferred)/ Disneyland:  The joy of Space Mountain is in its speed, the vertigo, the mission control dudes in their pod ready to supervise your journey, and your fear throughout the ride that you may be decapitated.  (It just feels that way.  Only a few people have been decapitated on Space Mountain.  You’re safe as long as you remain seated.)  The line for Space Mountain is also awesome—silver balls from a ball pit, a tunnel so long it can make you sick with claustrophobia.  Sit in the back.  You’ll be whipped around until you feel ten years older.  In a good way.

20,000 Leagues Under the Sea, formerly Disney World and Disneyland (RIP): the best ride vehicles of all time.  These were actual submarines– on tracks, never underwater more than an inch, but still, submarines.  You were underwater.  They looked like the Nautilus, outside and in.  The portholes were real.  The organ music filling that little space, while you sat on your little stool, gazing out at mermaids and the giant squid tentacle and the lost city of Atlantis—I grieve the loss of this ride.  I love Nemo’s story, and it made for a great movie, and a great ride.  The queue sucked, but it didn’t matter because the ride was so amazing.  I miss the hell out of it.  (Please also note the dudes running the ride wearing identical uniforms to the seamen in the movie.)

Queue: 3 (nothing to see, and slower than Christmas)

*A short digression, Melville style: That little detonator, so beloved in children’s entertainment!  The little guy on the Muppet Show who blasts things up.  The blaster is but one of Wil E. Coyote’s tools, but it’s a favorite.