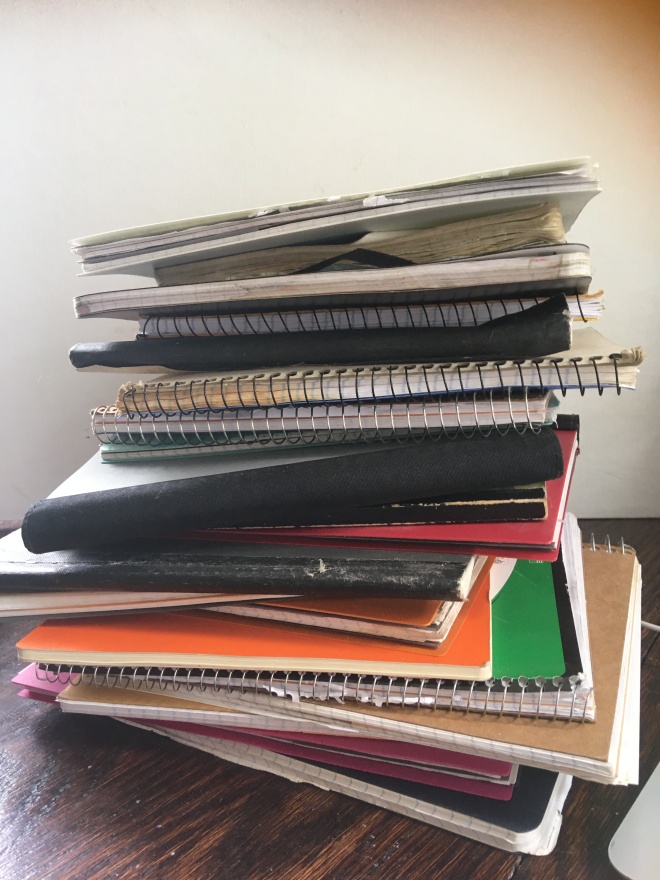 I went through all the journals I had handy and looked for the closest entry to today, May 18.  It became an interesting document.

If I don’t occasionally go through old journals, I become convinced that all of my past was easier and more fun than my present.  And all times have their fun and their burdens.  Names are both abbreviated and changed, according to whim.

2004: All I did my senior year of high school was feel.  And that filled hour after hour.  I’m at Loose Park now.  A boy is throwing goldfish from a ziploc bag into the pond, and his grandpa follows him, wearing a navy jacket.  The ducks here are rarely interested in crumbs offered– they get fed so much.  I never try to feed them myself.  Just watch their sparkling green heads, the blue patches on the drakes’ wings, and thier sloppy paddling feet.  Their fights, their landings on the water, ruffling the surface…. My drink at the Pig Saturday night reminded me again of how much I love it.  So charming, safe, wicked.  No smoking after July 1, though.  I may cry.

2005: When I got home, I learned that C had called G to apologize for the ranting over Medicare and Christianity at Charlie’s.  I had loved that conversation, and G had, characteristically, sat back, smoked and looked bored to suffering.  I found it bizarre that C apologized for a) not interesting G in conversation and b) discussing Serious Topics over drinks.

2006: I ended things with Group A yelling at them…. And Group E insisting that we were going to be locked inside the building to review for a final exam.  It was a last day more infuriating than mournful– ending with J going carefully through the study guide, M and I on either side of her.

2007: Churchill, and Spiderman, insist on the power-responsibility connection.  Today I’m feeling rather tired of both.  Angry at J for figuring grades wrong, at D for pushing me, but we made it through.

2008: T, in creative writing, claimed that he had learned nothing.  I controlled my fury at this.  We talk about drugs, sex, friendship, pornography, families, violence, and he learns nothing?  I was so tired Friday.  i was too tired to kill him…. I plowed through the last full day of the year so tired that when I finished all my grading and stuff, I didn’t want to go home.  So tired that when I did get home, I laid down to try to sleep, and couldn’t do anything but squirm, move, rearrange my limbs, retuck my hands and renuzzle my face into the pillows.

2009: But– I just found the hotel I want to stay in in Rome– it’s in the Jewish quarter, easy walking distances, a rooftop bar, built in the 15th century, and joyfully, they have a room with a twin bed, which is quite cheap– affordable, let’s say, and I think they even feed you breakfast.

2010: That child should not graduate.  Cannot read, write… I hate high-waisted pants, too.  Now it’s skinny and high-waisted?  WTF?  Again.  Gross.  I was bored again today, actually.  No class 4th hour.  Not a lot of need for me.  Read as much of the NYT as I could interest myself in.  Sometimes I think if I don’t have sex with a man, I’ll eat me.

May 2011: Went to “D visiting” dinner last night.  D kissed me on the cheek!  Is he adorable or what?  Said he writes a lot, on his typewriter, as he smokes and drinks Pepsi.  Be still, my heart.

2013: Somehow I didn’t enjoy the dinner last night because I’m jealous of L…. She’s never had to be single– swept off her feet by a guy who wants to support her!  She can write all day, or work, or work part time…. I am jealous she lives [where it is] artsy and cool and there are flowers all the time… Why do I always have to settle?  Why do I have to live in a second-best place…?

2014: When I got on the humble 2 train this morning (humble due to only 2 trains, from that station, and they go to Manhattan on the further-into-Brooklyn track.  The announcement said, “The next stop will be BEEP,” very loud, censoring kind of beep.  It was sweetly tragic.

2015: I hate everyone’s haircuts right now.  I hate the stickiness of night now, too.  And will I get a drink while i do laundry?  Drinking sounds so good when you are dealing with an alcoholic friend… Talked with the boys (T, S) about God and T says God is telling him to feed his sheep when T helps a guy carry a stroller down subway stairs.

2016 : So this week I was told my ovaries have shut down.  The next day my editor from H called me and gave me the most encouraging, positive feedback maybe ever, coupled with the names of agents he thought would like me… Somehow I’m going to have to pee at the Port Authority.  That’s gonna happen.  No.  Doubt.

2017: I was overwhelmed with anger at K yesterday…. I emailed her back right away.  Fuck her, fuck her….Yesterday, J asked me, “Have you ever been in love?” And E asked me, “Who do you prefer, Bach or Mozart?” Yes, and Mozart….

It kind of sneaked up on me how in love I am with them.  T and her shooting a gun at the shooting range.  J not watching the videos for her class and obsessing about justice so she can’t see the forest for the trees.  G and her cohabitating no-nonsense and passion for a bad girlfriend.  K’s fire for undocumented kids, and thirst for wrestling with race.  C’s tenderness, soft-shell crab that he is.

2018: Finished the training videos from P that I had.  Was at a very cool school today, but left my fucking sweater.

I did not get lunch 3/3 working days this week.