I drove the length of Emporia, Kansas, from the college that my great-grandmother and my grandfather attended, to the river at the other edge.  They have 25,000 people.

My great-grandma’s hometown is currently at 383.

The perky downtown has ramen, Mexican, a wine bar, a brewery, and a place called Bourbon Cowboy, which I only notice on Sunday, when it is too late to check it out.

Past downtown, I cross the tracks.  Emporia has more trains than anywhere I’ve been.  I had heard them all night, upstairs in the house built by the founder of Emporia’s bank, Will Wayman, in 1901.

The edge of town is the Cottonwood River and Veterans Memorial Park.  Someone has mounted a Huey, and someone has parked a Sherman tank.  There is also a huge anchor, painted white so it looks like a twisted elephant bone. Our American wars are memorialized.  Emporia was only five years old when the Civil War began.

I walk out on the bridge.  The shape is rainbow, but the color is grey.  A shirtless guy is fishing off the side.  The water is roaring dangerously, making a short but powerful little waterfall.  Bobbing sticks and one sad blue beer can bubble around so vigorously I imagine being pushed underwater and ruined.

A couple with decidedly old-fashioned haircuts and sunglasses are looking, too.  “It’s really raging, huh?” I say.  We chat about rain, about the floodgates of the Missouri River. 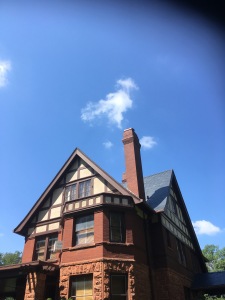 At the other end of town, I visit William Allen White’s house.  He is not, I realize, E.B. White, of Charlotte’s Web.

This White was a good friend of Teddy Roosevelt’s.  TR visited White in Emporia.

I check off another Roosevelt box on my Roosevelt pilgrimage score card.

White is most famous as a newspaperman, and I have a newspaper fetish.  I got a copy of the still printing, still showing up Emporia Gazette.  It is owned by descendants of White’s.

News: Mr. G’s Express Car Wash to begin washing cars at 6th Avenue and Prairie Street.  Mr. G’s dream was to own this “friction” car wash, and this makes me wish I had a dream that seemed that approachable.

“The lot was supposed to be the location of Walgreens.” W.A. White would be happy.  He did not like chain stores.

There is no Sunday paper, which is an affront to my civic religion.  The museums are all closed, too.  What does one do on Sundays?  When I was wandering Sunday morning, church time, I did have the sensation I was walking among the heathens.

On the campus of Emporia State, I find one building, Plumb Hall, that was there when my great-grandmother was in school there, in 1919.  The institution was transitioning from a get these kids taught model to deeper philosophies and ideas of pedagogy.

Tuition was free because everyone was lazy relied on the government for everything.

The bookstore in town is also named after a Plumb, Plumb’s daughter, who was one of the Teacher’s College.  In the window of the bookstore, a white cloth mannequin with an alien-length neck wears one of Miss Plumb’s dresses.

In a place so peaceful, cheerful, thriving, it is strange to see.

But that weekend, there are two more mass shootings in America, adding to the casualties of our second Wild West period: people die at a Wal-Mart in El Paso, and at a bar in Dayton, Ohio.

Very soon, students will be back at Emporia State University, and all our other public schools, making history we can’t see from here.

I get coffee at a lived-in little place with a whole wall dedicated to Dirty Kanza, which I later realize is an annual bike ride.  Waiting in line, I use my sunglasses to flirt with a kid who is amazed that my eyes can appear and disappear like that.  I chat with his parents, who tell me they can drink coffee as late at night as they please.  The kid asks for coffee, and they tell me they already give him coffee.  He has their genes, so it doesn’t hype him up.

I don’t know whether to be sad or happy for their genetic situation.

We may think of Kansans a hundred years ago as provincial or isolated.

My great-grandmother went to college.

She traveled to San Francisco to visit her daughter, and her husband drank his first glass of wine, as fast as he would drink milk, gulp, gulp, gulp.

She received regular postcards from the son who traveled the world, and then dealt with his divorce and many remarriages.

She saw electricity, indoor plumbing, airplanes, and television come in.  Maybe a hundred years ago there was actually more to see.