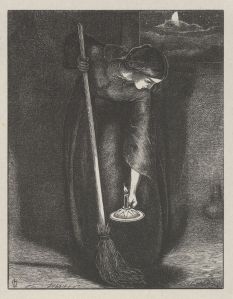 It’s ironic because, of course, all the original Christians were poor as dirt.  It should be easy!  The founder kept saying things about how it was good to be poor, but in a nice way, not like, “Isn’t it great to wonder if you should get cereal at the grocery store because cereal is expensive?”  Because that sucks.

Can you imagine, the guy said, “It’s pretty much impossible for rich people to be okay,” and they kept this in the book of his sayings.  Think of the things they must have left out!

I have mostly belonged to churches that were rich, partly because I have spent my career working with the poor, and on Sundays I just can’t be freaking out about if the church can pay the light bill.  I need to know someone else has got that.

(That is not to say these churches, and the Episcopal church as an international organization, don’t gather and send a lot of money to people and places who need it.  They do.  And I love their beautiful, beautiful buildings, which inspire me and make me feel safe.)

Belonging to a rich church, though, means that when they do the pledge-gathering and money-collecting, you can realize that the other people there are possibly not worrying about if they will be able to pay their rent.

There’s an assumption that everyone sitting out there is holding something back in these speeches, oh, God needs you.  And a person who is battered and shaky from working with people who are abused or poor or deeply suffering can feel like, “I don’t belong here.”

The guy who spoke at church today talked of a touching and worthy ministry with people who are poor, but I was also wrapping my mind around the idea that I now have a job where my superiors set up a food pantry for us, and that I was going to ask my parents for money for rent.  Why did I make life choices based on service and do-gooding instead of money?

I’ve been reading Sarah Smarsh’s book, Heartland, which if you have not bought or read, you should buy immediately (or demand it from the library!  or borrow my copy!).  She writes about the shame of poverty, and the way our government has slowly turned up the heat to boil people who are poor in their own oil since about Nixon.  (Fun fact she includes: Nixon was proud that more people applied for and got food stamps under his administration how can that be true?)

Her family was rural poor.  My family was overeducated, underpaid because doing “women’s work,” and without camaraderie in our money worries.  Basically my situation now except there are other graduate students around.

I thought a lack of money meant I had done something wrong, though what it meant was that people in power thought they deserved what they had, and more.

This is an idea Smarsh highlights repeatedly in the book.

I don’t think I can hear it repeated enough.

It just warms my heart so much when you reveal you lack money.  It’s so transgressive.

If someone, regardless of a lack of funds, still have a glass of wine or buy a $10 breakfast or a lipstick or a book and says to herself, well, I’ll figure that out later, I love this person forever.

I had a friend at my church in Kansas City named Wayne.  Wayne had some mental illness, or was two shakes short of a lamb’s tail, as my sister says, or whatever.  It doesn’t matter.  He was the fool in the Shakespeare play of our services.  When two of my students were shot, Wayne was one of the only people who responded to me in a way that made me feel better.  “That’s awful!” he said.  “Do you want me to pray with you?”

If I were not a very quiet Episcopalian, this might have been a normal exchange, but I am, and it wasn’t.

Wayne would tell me he needed money for food.  Sometimes I gave him some.  It depended on if I had cash, or if I was feeling safe myself, or poor, myself.  It was all right if I didn’t.  He would ask me for a ride.  I would drive him.  But I admired his ability to ask for what he needed.

My first impulse upon feeling I need something is to watch television.  Or feel sorry for myself.  Not super effective.

Wayne gave me silly little presents that no one wanted or needed and were not his.  Say, a boutonniere from a wedding at the church the previous day, or a brochure from the rack in the hallway.

So Wayne died.  He was old.  He’s the third person at the church who was sweet to me and died.  Three significant holes.

Wayne helped me remember that my show-off brain does not help me love people, or love myself.  It’s good for doing all this grad school reading and figuring out how to help my students.  But not for healing, not for love.

I listened to Dr. Ford testify this week, and then I got in the shower and cried and cried.  I got out of the shower and made myself get dressed, but I had to stop and cry again.

I couldn’t listen to Kavanaugh speak.  I just couldn’t.

Although I for real blame God for every instance of violence and the pain that comes from seeing and hearing an entitled dangerous bully have such power over my country, I went ahead to church.  Last time I went, I felt better, so maybe… whatever.

I walked in and felt quite self-conscious.  I am an experienced churchgoer, and a large part of me is showing off at a new church, like, look, I know what to do here.  But this is a small-town church, I thought.  People will, like, notice that I am here.  Why did I wear red?  And why are there so many white people?  I missed my thoroughly-mixed congregations in New York.

Then the acolytes and priests walked in, and both of the acolytes were young men who were black.  Stupid God and God’s stupid jokes.

When we sat down because a hymn was done, someone up front was still standing, and a sliver of back was exposed in a black garment.  What’s up with that?  I was new there, and for all I knew, this was somebody about to read a lesson or something.

When I went up to communion, I saw that the person in the black garment was a guy wearing a Cat in the Hat costume, with eyeliner whiskers on his face, and purple sparkle fingernails.

I’m still mad as hell at God, and scared, but I like to sing.  And they read the story of Esther, which was a good call: woman speaks truth to power and saves her people.  And it was nice to see the Cat.

One thought on “How to Be A Poor Christian”