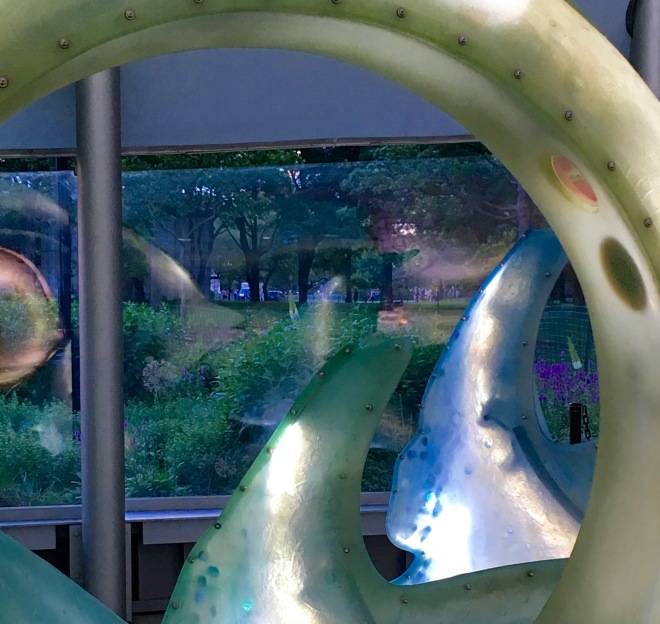 We were given square canvases and teal and purple and white paint.  I found the teal and the purple horrible.  The teacher was going to guide people to paint a dandelion with its winged wishing seeds in the wind.  We did not have to paint that.

It took me a while to figure I wanted to paint a whale.  I sketched from a picture on my phone, I made a shape to trace on the canvas by running my pen over the outline repeatedly, until the liquid of the ink weakened the paper so much I could tear it out.  Then I mixed the teal and purple into a navy for the water.  The whale could be white.  I was pleased with it.  The Whale.

Later that day I was with a friend and walked past the Sea Glass carousel in Battery Park.  She is a native New Yorker, and had never heard of it.  “Will they let us ride?” she said.

We entered the bowl, so to speak, it is shiny silver on the outside, and round, and the fish are soft neon pastels, with a plastic softness and bubbles in them and tiny sparkles.  I saddled up inside a pink fish, it was not very wide, just wide enough for a person to sit inside the “o” left in his body.

Then they began: the music, a twinkly classical piece I couldn’t identify, and the moment of the fish was not around, simply, it was rotating on four separate turntables, and up and down, and the whole thing was rotating, too, slowly, not like some octopus puke-ride, but like a loose dance.  Around, up, weaving in and out, seeing one side, another, one fellow fish rider, another, and outside it was becoming dusk, it was the longest day of the year.

I took the train past Philadelphia, late at night I arrived.  My brother and his fiance stood at the little station to pick me up.  They took me to their little duplex, up the steps to their spare bedroom.  They had put a pillow shaped like a whale on my bed.  It was a whale shape, white, with a blue outline and eye.

Is the whale about something you can never have, but are always chasing?

Is it the thing that swallows you when you try to run away, and gives you a space to think long and hard?

Is the whale the same as the blue glass one I bought during my worst spell of health, years ago, and there was something about the weight and smoothness and color and palm-sidedness of it that soothed me?

Is the whale the playful signal that the New York waters are cleaner than they’ve been for years, thus the whales are again in our waters, ramble-swimming and curious-surfacing?

Is it the whale of the Natural History Museum, who hangs impossibly from one small spot on his lower back, and forever stays almost dived into that sea life room?  The whale who is annually vacuumed, with a long, long attachment.

A huge self, quiet until she sings, underwater almost always, but for air, only for want of taking in air through a single hole, she must surface, she may surface, she can.

Aside: the music for the Sea Glass Carousel is:  “Aquarium” by Camille Saint-Saëns; Symphony No. 40 in G minor by Mozart; “Daphnis et Chloé,” Suite No. 2, by Maurice Ravel; “Dance of the Knights” from “Romeo and Juliet” by Sergei Prokofiev; and “La Mer” by Claude Debussy, arranged in new ways, with new instrumentation, by composer Teddy Zambezi.  More details.