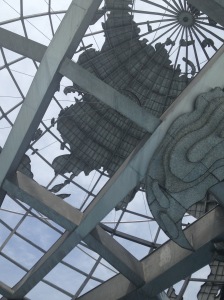 I didn’t go to Queens to see the Unisphere.  As I approached it, it opened and arched and bent different ways, and I stepped up and over the edge of what would hold in water, if it was summer, and walked under it, and there was a kite caught in one edge, near the Americas, and it broke me how pretty that was.

I walked over to the “Men in Black” towers, that is what they are to me, they were the New York state pavilion in 1964.  (Right across the path, coincidentally, was the Missouri pavilion, which showcased the Missouri space industry, whatever that was then.)

I knew the towers were neglected and awful, but they were worse than I had been imagining, or it felt worse to see them.  There is a theater now, hugging the towers, but the towers are nothing.  They are flaking apart.  I walked up to the fence around them, until I saw a police mobile unit.  I would guess it’s pretty hard to sneak in there and look around.  When I tried to get a touch closer, a cop asked me not to.  The towers used to be for observation, so you could look out at everything.  It’s strange that it is the New York state pavilion because New York City is only nominally in New York State, that is, it’s awkward for all of us that New York City is in New York state, since New York City is in so many ways its own little country of customs and language and people.

It made me think about broken and flaked away things that were inside me that I didn’t really want to think about, and I wished I hadn’t looked at it.

Behind the unisphere, now, is the Queens Museum.  It used to be the New York City pavilion.  Now it’s a Queens place.  The boroughs here have their own little museums, which are smaller and more provincial, in some ways, than museums in cities.  Brooklyn and Queens both have their own little zoos and botanical gardens, just to show that they can.  What the Queens Museum has, really, is the largest architectural model in the world, of course, since you are in New York City, it is of New York City, despite the fact that you could go someplace and look at the actual New York City, say, from Governor’s Island or the top of the Empire State Building, both great views, or from the Brooklyn Bridge, people come from all over to look at tiny pretend New York City.

It is a better view, fine, it is, but it still feels as crazy as here, where in spite of being told all the time how important we are, we also like to look at ourselves and trumpet ourselves, periodically.

Now there is a series of ramps around it, which functions as a practical alternative.  Your first few steps are on glass, below you is a part of the Bronx no one cares about, the other parts that are glass are Queens and Staten Island (ditto).  Everyone stops to gaze across Manhattan, spoiled cradle of the city.  Count the streets.  People stop to find where they live, for me, the park, then up, then over.  Find where they work, for me, that is another park, another big one, pretty easy.  Find other parks, and watch, on fishing line, a tiny white airplane go up from LaGuardia, one up to Europe, I guess, and one over and up to the west, to everywhere else.  The trajectory is like when Tinkerbell flies from the top of Cinderella’s castle, suggested by Walt Disney on my mind.

I studied the World’s Fair model under a dome of glass, which was upstairs, and found the Ford, General Electric, and Pepsi pavilions, those being the ones designed by Disney.

I thought I would be excited to see the World’s Fair stuff they had, but mostly it was crummy souvenirs people bought, with dumb pictures on them.  The model was more interesting, and sadder.  None of those things were there.  Not the girlie shows at the Louisiana pavilion, not the skyway, which I neglected to ride at Six Flags last year, not the Ford pavilion with drivers making figure 8s twenty-four hours a day, not President Coolidge’s pygmy hippo Billy, not Les Poupees de Paris, not the Pieta, which I couldn’t believe the Vatican thought was fit for travel, I mean, I guess it’s marble and tough, but if I owned the Pieta I would not let it out of my house, period.  Not the electric typewriters, not Better Living Through Chemistry, not Franklin Roosevelt and Albert Einstein giving a speech on televisions that had just barely been born.

So I thought it was sad.

I forgot to look at where the time capsule is buried, or the spot marking where the pope was, though I don’t care about popes.

When I was back in the city, walking from the subway to church, down St. John, across 6th Avenue, I knew how small I was in the model.  How I was speck in the tiny canyons, all of us were.

The other big piece at the museum is a model of the watershed, which does the absurd thing of showing us how the land that we live on works.  Not a building, not a street, not a sidewalk, not even a tree, only how our land is, under us, which we can’t notice or see, maybe only the cyclists can, do, the rest of us feel it so little, up or down, so little altitude here, apparently, though, it makes our water run, and the whole model, so much less visited and remarked on, shows what is here that makes us, more than the sprawl of our wonders, which we know.