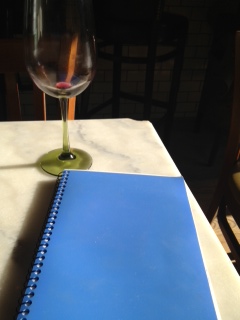 I thought I would be ordering pie, but when I asked the woman about the pies, she listed three things none of which were chocolate, so I was confused.  I needed coffee, though: the G train had run express and then kicked us off before our stop, so I waited on the platform one stop away with a couple of my students, some of whom had their baseball bats sticking out of their backpacks, they had either not seen me or were pretending not to,  showing that commuter respect.  So I hustled on to work right past the window where I got my coffee, I had to get straight to school, I went without.

I was worried about missing my caffeine, you would be, too, if you had my headache history.  I would get coffee, by coffee I mean, generally, a latte, I loved steamed milk, the only thing I wanted besides cheese and sleep was other dairy: ice cream, steamed milk.  I was becoming a cow.  I was feeling my deep northern European cattle domesticating roots.  I would also get macaroni and cheese.  It was never too early for dinner.  The woman cut a slice of macaroni from a pie tin, put cheese on top of it, popped it into a toaster oven, and I saw the man next to me drinking white wine from a big green glass.

“And wine,” I said.  The wine glass I got was also green, green glass, and the macaroni was pale, and the coffee was in a blue mug, and we all of us had half a table of direct sunlight, which is the only thing I miss in cities.  I read my book and hated that the author had written about some things I loved and thus they were already written about, but then I loved it because I felt kinship, and later I looked up to be enchanted with how beautiful things were, even the wallpaper in the bathroom, and the ceramic dragons on a shelf next to the sink.

At physical therapy, my doctor was having me put my fingers through a plastic net with circular holes and twist.  It felt like nothing.  Or I was holding down a stretchy band and pulling it a certain way.  That was hard.  Nothing felt better, after a month of physical therapy, but I wanted to tell her I didn’t care.

My government teacher told us, “You are it.  This is the flagship of the fleet.  How hard are you working?”  At least one of us was going to Harvard, so we figured we were the flagship of the fleet, this entire line of attack felt so right to me, fretting about what I owed the world, or what I didn’t.  Try as someone might to say, you aren’t that straight, I have to say I remember not a single female in that class, though I had a great awareness of every male I shared the class with, every atom of each of him.  The first boy I danced with, who was at the time claiming to be a Republican and later became a Democratic politician, the boy I would later casually read Romeo and Juliet with in my bed, I know there were others, it felt a very male-dominated class, which I didn’t mind except that I sometimes found it hard to judge when to break in and make my point.

I didn’t know it but I had much buried admiration for my teacher, and when I went back to his room for some reason at the end of the year, he said, “I’m sorry, Elizabeth, I wish the class had been better for you, and you should’ve spoken up more,” which I was frequently told in high school, and I thought meant people wanted me, which I thought was good, always leave ‘em wanting more, I wanted to tell my teacher I loved the class, his metaphors, his giving us time to talk things through, his occasional weighing in on the state of our underground newspaper industry, when he always leaned in favor of my publication, above all, his seriousness, he was funny but serious as the French.  This is the sort of teacher I would be, interested, cheerful, brooding, wondering what, if anything, I had done well.  “I loved the class,” I said.  We were the flagship of the fleet.

I went into the overly expensive shop where I bought a shower curtain and saw the sheets were 400 thread count and sixty dollars.  I have two sets of sheets for my bed, one from Wal-Mart, dark grey, poly-cotton with too much poly, so sometimes they make me sweat.  And a set from Target which has green flowers, which I saw when with my stepmom, and she quickly insisted on buying them for me, I was in love with the pattern, immediately, as I have once or twice been with a man, well, love– something.

I still like the sheets, though I sat cross-legged on my bed painting and got blue paint on the sheets.  So they look low-self-esteem.  I decided I was paying fifty dollars for sheets, I liked the blue stripes, they were on sale for fifty dollars, which was too much, but there they were.  I took the sheets to the cash register, and the woman, who is bald or has a shaved head, I’m not sure, said, “Okay, babylove.”

My students had argued about heroin safe centers, places you could shoot up safely, one said addiction was just as bad as being dead, anyway.  The other one yelled at him, of course not, would you want your brother or whoever addicted or dead?  Another one of my students got his nose pierced this week, and I was pleased I noticed, and asked him some questions to write the real story of something awful that happened to him, by asking him to write about the horses he saw that day, also, although they seemed like an extraneous detail, they were not.

For the second time in my teaching career, it was explained to me at an English department meeting that books not being used were kept in a secret location that required a key none of us had.  I have already been in the process of carrying all the books in the library downstairs to my classroom, since there is no librarian and the students never have time or permission to go to their own library.

Once I went to a wedding and briefly cried in a graveyard during the reception, and when I came back from the graveyard, I danced to “Benny and the Jets,” and I think of that about every tenth time I hear “Benny and the Jets,” as I did at the pie place where I did not order pie, “Hey, kids, plug into the faithless,” the other times, I think of Elton John on “The Muppet Show,” “you’re gonna hear electric music/solid walls of sound.”