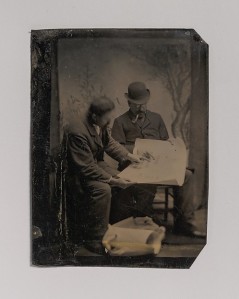 The bar was full of “RESERVED” signs for ghost people who didn’t need to sit down like people who had taught all day and were wearing heels.  I asked a tall man if he knew who the hell all these people were.  He did not know.

The tall man was almost thirty.  His buddy was my age.  Each told me the other was gay and we chuckled and they brought me a martini with Hendrick’s instead of Bombay Sapphire and the older one was willing to eat my olives.  He showed me photos of his children and nibbled my ear, which I enjoyed, and I said, “Tell me, since we will never see each other again.”

Yesterday my smallest class had five students.  I have only four female students, and none of them are in that class.

“Oh, I don’t worry about that,” I said in response to something silly one of them said.

“What do you worry about, Ms Schurman?”

“I was waiting for the bus with these other guys, and the bus driver pulls up and sees us, and he won’t open the door, and I went up and pounded on it, like, hey, and he was black, too, so it was like, seriously?  You know what guys like us, young black men go through in New York, and you’re not gonna stop for us?

I ran to the next stop, and there were other people there, and he had to let us on, and I said, ‘What are you doing?’ and he said, ‘Seven years, you get seven years if you touch me.'”

“You have to be careful.  How late was it?” another kid asked.

“No, you don’t, I worry about you guys because you’re in danger all the time, even if you are careful.”

The first guy continued, “Once I was on the subway and this lady started yelling at this guy that Trump was going to deport people like him anyway, which was crazy, because she was black, and you know, Trump doesn’t like you, either, and everybody in the car was like, looking at her, and I couldn’t take it, I started telling her to be quiet.”

“When she got off, everyone in the car, like, applauded.”

One of those kids asked me for a piece of paper to take notes when we had a guest speaker.  He wrote down what color suit and tie to wear to a job interview.

I have never bought myself perfume.  I have owned two bottles of good perfume, one from each person I have been in love with.  I decided enough was enough and I went into Bloomingdale’s and found the Chanel counter.

I find department stores migraine or panic attack-inducing, depending on the day, but I was being fancy, I had gotten paid, and I was out of perfume, really I had been out for at least a year, enough was enough.

A man with a crooked tooth asked what I was looking for, offered me many things I did not want in addition to the perfume, but nicely, told me I had good taste because, you know, that was his job, and he wrapped the bottle, in the white box, in tissue and put it in one of those brown bags, which did make me feel Betty Draper as I carried it down the street, I did not feel neglected, but pretty.