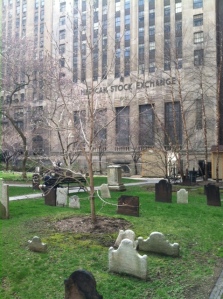 The carpet and the kneelers are red.  The Christ holds a big blank ball.  Presumably, the world.

One of the graves in the Trinity churchyard is for a fictional character.  “Charlotte Temple” was a character in Charlotte, a Tale of Truth, published 1791.  The sign says, “Legend has it that the name…was carved by a bored stone cutter while working on the church.  It is unknown if anyone is interred in the vault beneath the stone.”

The subway preacher begins in Manhattan, singing of the glory of God, but by Brooklyn God will punish both you and your enemies.  In the most amazing way, everyone is listening yet only one person shows it, one responder to call.  I stand.  I think about his arguments and my thumb plays swap the colors on my phone.

The spring means you can see the graveyard.  The cemetery was founded in 1697. My ancestor, Harmen Schurman, died in New Amsterdam in 1649.  In spite of the great age of the stones in the place, the first Schurman in Manhattan had already been dead for more than forty years when the first grave was dug.  They have those kindly skulls, the inscription “Here lies the body of…” as if you weren’t sure what might be buried in a graveyard.

One of them has a wholesome warning about how even you, dear reader, will die.  That is William Bradford, publisher.  Bradford knew Benjamin Franklin.  Bradford lived on Stone Street, which is where I had lunch today.  He printed the first book in New York City.

Last night I read one of the stories of Christ appearing to the disciples after the crucifixion.  It says that they thought Christ was a ghost, and he had to prove he wasn’t.  Thus, ghosts are real.  No one said they weren’t.

The graveyard has free wi-fi, so a woman was holding up an iPad and having some sort of work meeting on a bench.  A tree with white blossoms was blossoming.  Tulip arms were up, but not heads.

I ate lunch with my colleague and we told stories and we really enjoy each others’ stories.  When we came out of the restaurant the brick street was full of not just tables and awnings but everyone at lunch and free.

When you see the Christ with the world, you might recall he said, “My burden is light.”

One thought on “Heavy/Light”