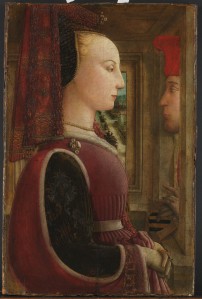 Horrible pink and gold in the Chanel windows right now.  Very sad because “Chanel” is my favorite, probably because of the sound of the name, the same reason I like “Jameson,” truth be told.  My therapist’s office is on the upper east side, one of the fanciest neighborhoods in America.  My walk back to the subway is down Madison Avenue, past Chanel, Michael Kors, Chopard, Oscar de la Renta, Fred Leighton, which I know from magazines and watching the Oscars.

Some of the windows have mannequins with stuffed animal heads or other accoutrements intended to look whimsical, only succeeding in making me sad.  I don’t walk down such a street and look at such windows to be amused but to be enchanted.  It is the Oscar de la Renta windows I love most.  I resisted this notion because Oscar de la Renta reminds me of Nancy Reagan.  What are you going to do, though?  I have realized now that when I am rich (hopefully never), or a rich man wants to dress me (which frankly would come with its own awkwardness but we’re fantasizing here), it will be Oscar de la Renta for the one time dress.  And wool skirts and pants in very soft wools, the best tweeds, no, what am I saying, I will have those custom-made, a-line, knee-length, beautifully lined, pockets.

My therapist said (gloriously New York), ‘So it’s not that men are afraid of you, it’s that you’re afraid of them.” I was paying her to say things like that.  To say that you are afraid is to set the table for eating the fear.

I sat across the table from a student who was writing a paper and said, “Sometimes people think of an introduction as setting the table,” and he looked at me blankly.

I don’t like how empty the fancy shops are.  It is funny that they have security guards, always, doormen, maybe they are, who stand around all day and make sure that the wrong sort of people don’t come into the shop.  I wonder how they work there and take such long train rides home to wherever they are able to afford to live and don’t feel fretful about the gulf between them and the people they see, maybe it doesn’t bother them, maybe they are philosophical about it.

The windows are still beautiful, especially the ones with real diamonds and emeralds set up.  They are so sparkly they look fake.  When I saw the crown jewels in the Tower of London, I just thought, how tacky.  People didn’t know sparkly plastic or mylar then.  Sometimes the jewels have been put away for the night and there are only empty cream velvet necks displayed behind the perfect glass.  I am walking downtown to the train, down from the talking cure that I have finally got around to formally undertaking, or perhaps I am just paying to talk to someone without worrying that what I say interests her or how it makes me look, either way is good.

This is not a fear one can throw oneself against, like flying alone to Paris or committing to the maybe boyfriend one already has or moving to one’s favorite city, which is the good news and the bad news.  The fear that exists of things that have not happened, that fear can fester like manna did when it wasn’t eaten.  It is not as if I can make someone beloved by me to face my fear of him having such power over me, that is, of someone having that kind of power over me again.

When I was nineteen and in New York for the first time as an adult, a friend and I used to go on tours of “rich New York.”  One stop was the Plaza Hotel, where we made it up in the elevator to the ballrooms to look around.  The flower arrangements were bigger and more lavish, otherwise it was unmemorable, like any hotel ballroom with that weird carpet.   Five years later she would be staying in the hotel, for one extravagant night, her wedding night.  I would cry in the bathroom because no one would ever love me, and someone would pound on the door of the bathroom stall and say, “Are you okay?” and I would feel even worse.  I was okay, it was a nice wedding.  The Plaza Hotel is no longer a hotel.

I told therapist I had a bad panic attack on the subway, that going under the river on the train suddenly, for no reason, terrified me, and I bolted at Wall Street and paced and took a pill and walked and walked staring at the sidewalk, not looking up at the raininess or the fog until my brain settled, until I felt better and got back on the train and went under the river.  I didn’t feel she was terribly impressed by this, in fact, as I was telling it, it was sounding less extravagantly crazy than it seemed at the time.  “You still take the train?”  “Oh, sure, every day.”

I could be so much more interesting.

The Bloomingdale’s windows right now are curtained.  Behind the curtains, the show is going up.  Last winter, it was country by country, a Paris window, a London window.  A pink Eiffel Tower, a red and blue London Bridge.  Last year I tried to photograph them, but I didn’t try very hard.  There were moving elements, and it was dark.  I wanted to show people back home, but maybe they didn’t care to see them anyway?

Image: Portrait of a Woman with a Man at a Casement by Fra Filippo Lippi, the Metropolitan Museum of Art.