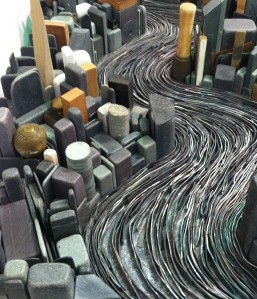 I figured they’d be late, so I went up after 9.  I went to the northeast corner, so I could see the buildings we can see, the downtown Brooklyn clock tower, and the so-called Freedom Tower.  The sides of the roof have tiles that are bent over to protect the edges.  The roof is scratchy.  I wore shoes.

Two roofs over, I saw a guy smoking.  I sat with my knees bent in front of me.  The sun took its time.  I didn’t have anything to do but watch it.  A few flowers of fireworks sprouted, wild ones.  Crown Heights ones.

The previous Fourth I was on a roof in Brooklyn.  My life was a lot of doll arms without any dolls.  I wanted to hide all day, but I went to a bar, to a rooftop, a balcony, had nice talks and drinks.

That afternoon I had been scribbling little writing practices, and one prompt was: “Where will you be a year from now?”  I wrote something surprisingly optimistic.  I behave like an optimistic person, but that is from my belief in absurdism, not hopefulness.

Fireworks started in threes, which I figured must be the real ones, Macy’s.  I could see the high ones and smoke and glow from the low ones.  It was all right.  I felt funny for wanting to be alone.  I have been alone more than I wanted to be in New York, and on the Fourth I was deliberately avoiding company.

I watched and watched trying to think of what I should think of.  Soon I started wishing for it to be over, and feeling bad about that.  Red, white, and blue, the yellow prickly pollenated ones, some green.  How long would this take?  I should really be enjoying this.  Disney World has spoiled me for fireworks.  Or the quiet concentration of twenty-five minutes’ municipal focus and enjoyment, there is something too pretty and too romantic about this.  What was this start moment and this end moment, and how could you be in the moment enough to be watching them instead of thinking about when they had begun, when they would end, where you had been, where other people were?

I glanced left to a lit window in the next building and saw a lady with curlers and a clear plastic cap.  She pulled shut a shower curtain.  Just like in a movie, she was cut off right below the shoulders, perfect propriety.

When I was a little girl, we lived on the main drag of our suburb, and the Fourth of July parade went right down that street.  There were coolers and aunts and uncles and watermelons, which I never liked to eat, and my pigtails would have red or blue yarn bows on them.  I was proud to be so cute.  At the bottom of our front yard hill, the parade went by, and later, fireworks.

New York fireworks continued.  I thought about everyone I knew and where they were watching fireworks right then, or had been, an hour ago (Central), two (Mountain) or three (Pacific), and whom they were with.  I was glad to think they were happy, as I hope they mostly were.

A man went past the window, and seemed to get in the shower with the woman, but not to any sexual end, they were chatting without delight or danger in their voices.  The shower curtain opened and closed.

The fireworks stopped.  For good?  I wasn’t sure.  It was the most unseasonably chilly fourth in my memory.  I had put up my hood, the wind was so insistent.  I waited.

I heard the woman say, “She…watching….” And I felt a little bad, but shouldn’t they get a window shade?  Wasn’t this their problem?  I didn’t even want to watch them.  The only neighbors I ever watched were at 3004 Grand.  My boyfriend and I crouched on the sofa in front of the window and watched across the courtyard as a couple…hung curtains.  The end.

Everyone looking at the same thing, just for a little while.  I decided the fireworks were done.  I got up, a little creaky.

One thought on “Fourth”