This is what I knew:

1. Most of the artists I love best were “discovered” in America at the Armory Show in 1913.

3. It’s on the piers on the west side.  I have been to Chelsea Piers now, with my kids, to take them ice skating.  On these huge things that go out into the water, they’ve put other stuff, now.  Like lots of convention centers that have great views.

Here were my pressing questions:

So I find something to wear that makes me feel I am adding to the careful and arresting visual environment.  When I get to the proper pier, guy tells me they can’t find my ticket with an ID or credit card.  I am too new to smartphone to realize when he asks if I have my ticket, I do.

I go down to the next pier.  That first pier was Modern, the other pier is Contemporary.  I think we should have stuck with calling our current art modern, but then, I love modern, either way.   I figured Contemporary was the place to be, anyway.  Once I got down to Contemporary, past a tented area selling food and offering stools and tables, I realized I did have my ticket, and successfully navigated several confusing checkpoints to get my wristband and get in.

Like most things in New York City, the Armory show is too big for anyone to figure out or manage, even the people who are running it.   That is both what I love about New York, and what is frustrating.

Indeed it was an art fair where I definitely could not afford any of the art, not even a little print in a bin.  There were no little prints in bins.

What I didn’t expect was that, in addition to all the booths of art, there were periodically areas of couches and stools, and several areas to get food and drink.  Like an art opening, like a Dolphin opening, for KC folks, the atmosphere was very relaxed.  People sat around and people napped, between art looks.  I realized I could have gone early and taken a very slow approach.  Unlike at a museum, where I feel I have to pace myself and force myself to be aware of when the cafe is open and make myself take breaks there and get fed, the Armory Show has all the time in the world to let you snuggle down, chat with friends, come and go.

It was fun that there were people there from all over the world.  The bored people sitting at the tables in the booths chatted with each other in German, Chinese.

But enough: what was there to see?

Bjorn Dahlem, Probability Tree.  I love trees.  Dahlem’s trees grow out of perfume bottles, and the little P in the middle is P for perfect.  See how the way things go can spread out and where things can go?

A photo of a  library I didn’t think could look so gorgeous, at least not a nondescript library like this, but it’s about color, right?  Blue, blue, blue, and like all the pieces here, it looked much better in person than my poor iPhone skills would suggest.  (Hrair Sarkissian.) 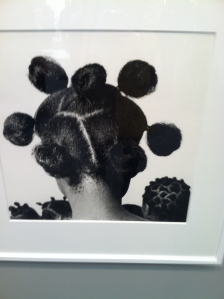 Third: because I am a bad person, I forgot to photograph the name of this artist, but it was a set of nine photographs, seven of them the beautiful backs of black women’s heads, showing off their complex hairstyles, and one in profile, and one from the front.  So many of them as objects, as what people might ask them about, or wonder about, instead of themselves, troubling, maybe.  They were lovely, though, all of them, and this one rather tree-like, speaking of trees.  Dr. Seuss trees.

Why does this rabbit trust all these cats?  I have no idea, but look at him go.  This booth had a whole collage of pieces like that hanging, including one with the rabbit making a sculpture of the cats to go with his painting.  One thing that makes me sad is that people are often so serious when they look at art.  This was the first silly piece I saw.  (That one by Atsushi Kaga.)

Last in this post, one of the most popular pieces: a view.  Patrick Jacobs makes portholes that you look into and see a whole world.  People gathered around them and grinned and oohed.  There were three.  One reason you go look at art is to see magic, and these were magic.  There was a world in there, sure as the world you imagined of fairies living in tree roots or Borrowers or Pee Wee’s ants or whatever.

One thought on “The Armory Show I”