I won’t be a snob about seasickness anymore.  They told us we might get seasick while the boat was tied up.  I only get seasick when I ride the Star Wars ride at Disney World more than two times in a row, so I figured I was fine. (For the record, I rode four times in a row in defiance of my nausea.)

First we had to board the little raft to ride out to the boat.  We were bundled up, me in my new heavy chocolate-colored sweater, ugly but serviceable hat, red mittens with removable mittenness.  It was mostly grey, and we were at the East River.  The George Washington Bridge was upriver, and downriver was the Freedom Tower.

These sailboats, where we were supposed to bond as colleagues, were small.  The other sailboats I’ve been on were both big enough to live on, albeit cozily.  This boat had enough space down inside it for six people to have a very uncomfortable cocktail party while sitting Indian style and not have anywhere to pee.

Rather than be taught, one of our crew was to read directions from a book about sailing, and the rest of us tried to follow them.  She was good at translating the book into action.  When I took a turn, I got stuck on the first direction I read.  I couldn’t find that thing, or figure what we should do with it when we found it.

When I took a turn trying to read How To Sail, I started to feel seasick.  Trouble was, as we had been told, when tied up, the boat bobs a lot, can’t go with any current or any wave of passing barge.  “Look at the GWB,” our teacher said.  “It happens to me all the time.”  I looked at the Freedom Tower.  That was the way I was facing.  I started to feel less like puking.

Eventually we got the sails up.  Once untethered, we moved out into the water, praying that our East Riversickness would lessen by being able to watch the horizon continuously and go with the flow.  And we learned the four jobs.  Two people tighten (trim) and loosen the front sail, one person trims and loosens the main sail, and one person steers.

I was excited by the word “trim,” and I got to think back to my period of obsession with Herman Melville, and reading Moby Dick on the beach in Galveston, Texas, and thinking about what a bad, great book it was, and thinking of Melville living and working in New York in this sad, sad job after his youth of adventure, and feeling like a failure and not knowing how much I, hundreds of years later, would prefer him to Hawthorne, I mean, I would love to have dinner with Melville, and I would wear a beautiful dress.

When the sail starts flapping, and there is another word for this I’ve already forgotten, you trim it.  After lunch, I learned that when your boat snags the anchor line of another boat, you yell and pull down the sails as fast as possible so no gust of wind can push your boat over.

I wasn’t too alarmed.  I was like a ten-year-old boy.  When I am in danger, but there is nothing I can do, i.e., I am the passenger of someone driving fast and crazy, I am actually comfortable.  I surrender to fate, and I’m amused or frozen or both.

Our teacher was running around the boat, people were grabbing the anchor line and other pieces of equipment, clearly it was an emergency, and then our teacher, standing on the front of the boat with his hands clenched, released the line that held the anchor and it dove into the river like a lemming and he said, “Fuck.”

Since he had such a bad day, I’m going to add here that he was just as cute as I remember our rafting guides were, all those years we were girls in Colorado and pretended they were our boyfriends although for those boys to even look at us was illegal.

Suffice it to say that there had been, on our boat, patting of shoulders and silence and people trying to joke in a kind way even though they felt like shit.  It had already been a challenging day.

Our teacher sat for a while looking at his hands, which I imagined to have at least red and maybe bloody lines torn across them from the rope.  He blew on them to warm them.

We sailed back to the dock.  Once more, before we were actually back, the boat unexpectedly (to me) leaned way over so we could have fallen in.  That actually did scare me for some reason. 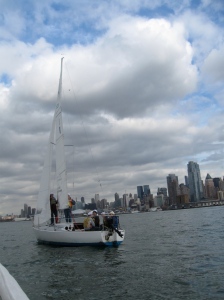 Our teacher read the wind the way I read the Bible, that is, with all my life history, all the times I’ve heard all those stories since I was born, and actually, in the womb, too, and all the sermons I’ve heard about them, the ancient Greek I remember a little and all the background I’ve read and everything I know about how it has formed the caves of other pieces of literature and the rest of history with its water trickling through the rest of our limestone, and I don’t even think about it.  He read the current, the tide, the wind, which in this funny place, this wind tunnel between Manhattan and the towns of Jersey is especially capricious.  He read barges and other sailboats and ferries and their wakes and the weight of our boat and the kind of sails we had and the skill level we had.

There’s so much to read.