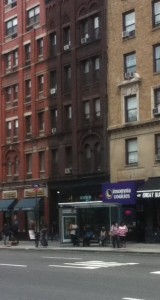 I realize that my facebook posts may have looked awesome, but trust me, this last month was really, really hard.  I would not suggest growing or changing unless you can’t stop yourself.

I felt unemployed more than I felt at leisure, although, yes, technically speaking, I’m still a teacher on summer break.  The only thing worse than dreading going back to school is thinking you might not get to go back.

I have a lot of letters and numbers in my head now, streets and avenues.  It’s always a street and an avenue and a 1 or a B or a 6.  I’ve added to my mental maps of the city, Union Square, another piece of the Village, lots of Brooklyn.

But: was it awesome and am I cool?  Yes.  Well, going to the New York Times was awesome, and I am getting a little old to be cool.  There’s a lot of really, really great art here, and periodically, that sustained me.  Great art, yes, and various TV shows on “Netflix” that I binge-watched when I felt too overwhelmed to leave the house.  I had to give myself permission to do that sometimes.

I have a job interview in a month, so I’m not exactly leaving.  I’ll be back for that.  My nomadic life just takes me somewhere else for a while.

I got tired of deciding what to do every day, for so many days, without a routine. I got tired of choosing what and where to eat, tired of never knowing if I would like my food.  Thank you, Amy’s Burritos and Naked juice.

Trying desperately to go to sleep when it’s so hot you need a bag of ice on the back of your neck is not great.  Maybe I had four nights like that.  Air conditioning here is like in Europe– optional, advertised on signs outside of restaurants that have it, and if the a/c is running, it is only intended to keep you from sweating, not from being hot. If it is hot outside, you will be hot.  At least I’d rather be hot than cold.

I don’t miss cooking, or driving, at all.

There is the idea that it is hard to live in New York City, and thus if you live here, you can be proud.  I am Yankee enough to believe this is true, and southern enough to suspect it is also ridiculous.  That, and the fact that almost everyone here works so hard, that’s what’s impressed me most.  I’ve been here in the hottest part of summer, and I was constantly surrounded by people sweating and getting rained on, pushing carts and lugging boxes and bags and sweeping and taking orders.  Maybe it’s only because I’m unemployed, and I’ve spent most of my time in modest neighborhoods, but damn, people here work hard and it shows.

I think this is America, and we should get rid of Texas.  I think that’s why I’m here, and why I’ll be back.  It’s still unclear where I will stay.