I planned to explore the most quiet, boring areas of the museum, partly out of self-defense.  First I ate lunch in the Met’s cafeteria.  Always eat first.

It was the wine I had with lunch that gave me the bravery to take my heavy bag up to the coat check, hand it to a young woman, and lie to her.  “There’s something in here,” she said, as if she could get me to admit the presence of my laptop, iPod, and cell phone.  I would not.  She gave me a hexagon of plastic that said E110, which was much lighter.

I decided I would go wherever there were fewer people, as the cafeteria teeters on the edge of mob rule.  In my memory, the Asian sections tended to be least viewed.  So I went up to Japanese bird paintings, which sounded relatively boring, even to me.  One incredibly loud group passed through, and one couple who sat next to me and started holding hands, but otherwise I was unmolested in Japanese art, surrounded by screens and the black birds painted on them.  I drew one black bird.  What if that mean lady at coat check stole my laptop?  I would die.  I would have to kill her, or die.  How awful.

In the middle of one room, a taxidermied horse encrusted with glass bubbles.  I didn’t, don’t, know what to make of that, but it was beautiful, it was all by itself there, current art surrounded by its natural friends from long ago.  When I was six, my souvenir from visiting Muir Woods was a tiny glass deer.  Shortly after I returned home, I broke off one of his tiny, delicate legs.

The tag said the artist “whether intentionally or not” referenced Shinto sculptures of horses with mirrors embedded in their backs.  Can you imagine running around with a mirror on your back?  Always showing the sky?

Here is that deer:

I went into the most boring area of American stuff.  Furniture and portraits of 18th century Americans who all look either like they are in great tooth pain, or they are stoned.  I found a beautifully-shaped wooden bird that had been designated art by the Met, via the Folk Art museum, and added that bird behind my previous bird because I thought they would get along.

Someone asked a guard where to find the Ashcan School, and I happened to find it, too.  There was a picture of kids feeding swans that was a perfect smearfest, definitely swans and kids and a moment, but nothing more.  I found another piece I wanted to draw, and just about wore out my pencil.  I hadn’t bought a sharpener. 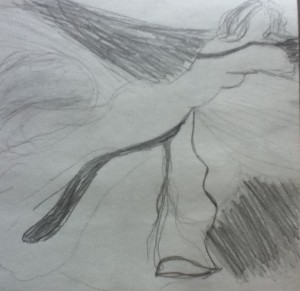 I didn’t write down who painted it, or what it was, because I was just wandering around and not taking anything seriously because I can go back to the museum like ten more times while I’m here, and, also, remember, I had had wine with lunch.

The last area I visited was the crown jewel of boringness.  The Met has a whole section of glass cases full of things that aren’t good enough to be art, but should, apparently, be taken a little seriously as being too good for garage sales or antique stores.  Or maybe it’s stuff that people donated and the people would get too pissed if the stuff is not on display somewhere at the Met.

The Vatican has so many marble heads of Roman people that I could not wrap my brain around it, like I thought they could give one to every Catholic for Christmas for a thousand years and have plenty left.

The Met has a lot of a lot of things.

There were fewer people there, so it was more relaxing.  They even had soft little loveseats where I should have, and could have, taken a nap.  Most of the people in there were European.  I don’t know why they thought they had to see that section of the museum.  Like they don’t have enough of old junk in Europe.

There were rows of blue painted plates.  A section of paperweights with flowers inside. A couple of those ceramic ducks that you can lift the duck half off and put something inside of (I have no idea what).  There were vases, candlesticks by the score, several rows of sculptures not good enough to be sculptures exactly, several rows of paintings that were not exactly paintings (sometimes I could see why, cheesy sloppiness, and sometimes I couldn’t).

There were rows and rows of just chairs, and more chairs, and then rows of tables, and more tables, like anyone gives a shit about tables.  There were so many that they didn’t even have real tags, but touchscreens at the end of the row where you could punch in a number and read about the thing.  Sometimes the screen would only tell you what the thing was, and a year.  Table.  1650.   Well.  That explains that.

Like a monk in a labyrinth, I walked up and down each and every row.

I felt sorry for the pieces in there.  I felt soothed by the calm of the forgotten place.  I used the bathroom in the corner, the bathroom that time forgot.  I was surprised I didn’t meet a dinosaur.  A phone on the wall said, “Call if this bathroom needs attention,” but I wasn’t going to do that.  How embarrassing to pick up a phone and say, “This bathroom needs attention.”  Who answers a call like that? Santa Claus?

I found an eagle on a gold gild mirror frame.  The mirror was pretty horrible, but the eagle interested me.

And thus concluded my Metropolitan Museum of Art Tour of the Boring and the Birds, probably not something they will add to their offerings.

One thought on “Three Birds of Fifth Avenue”