Halfway through, I crossed the street and went into the first bodega.  The second one, there were some guys on the stoop in front and it was unclear if that was a business or a money laundering operation.  A bodega on Staten Island, near the salt warehouse, is a lot like a grocery store in a small town.  It’s packed to the gills.  Narrow.  There are products I don’t recognize, presumably, stuff people there eat that I’ve never heard of.  There is one checkout station, one conveyer belt, which seems pretty silly.

Two ladies are working there, one leaning over the conveyer belt, and one leaning back on it.  They are watching television, so deeply they don’t notice me at all.  I opened the freezer case and picked out an ice cream sandwich.  I walked back over to pay, and they waited a second.  Something important was happening in Spanish, in a singing competition.  Then the studio audience applauded, and the ladies gasped, and the one behind the counter rang up my ice cream sandwich.

You got a tiny iPod at the Staten Island Ferry’s Staten Island station.  It was so tiny, you could swallow it.  You played the audio and followed a map around the island.  I’d come from Brooklyn’s island, to Manhattan’s, and then to this ignominious spot, an island I’d never spent more than twenty minutes on, and those twenty minutes, just waiting for the ferry back to Manhattan, the free ride, the salt mist, the Statue of Liberty, the lights of new downtown. 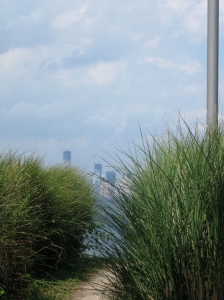 By the water, gravel trails, busted up concrete patches, waves sloshing, ships, tall grass, and the heavy sun.  It was August, and we were all sweating.  That is: I was alone, but I caught up to fellow walkers when we got to the salt, and I stuck pretty close to them.  We all walked, we all listened.  So even people who knew each other didn’t chat.

My favorite part was the beginning: seeing the stone piano that he made to please his love, to draw her out of the water. 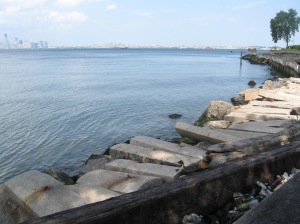 A volunteer let us past the huge fence and gates, past piles of salt as big as whales, through a dark, six-story-high building that trucks must drive through.  On some of the salt piles, huge blue tarps to try to keep the salt down. 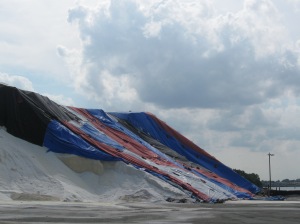 The audio was about the inventor of the telephone who got screwed out of any money or credit for it—an Italian man, who, in the authorial embellishments, had married a mermaid.  Sound was important to her, somehow.  Sound is also part of that most famous mermaid story, Hans Christian Andersen’s, in which the mermaid allows her tongue to be cut out so that she can be close to her love.  Without her tongue, there is no love on his side, so it doesn’t work out too well for her.  (Also, when she walks, her newly formed, split legs and feet feel like she’s walking on broken glass.  Ouch.)

We walked by produce markets, nineteenth century houses, up winding hills, past a monstrous apartment building with a gaping garage underneath it.  Once, we were in a little undeveloped woods, only a hundred square feet, but the forest primeval, even a taste of it, is something moving when you are within the body of New York City.

Our last stop was a theater, elaborately decorated, and, apparently, only recently rescued from the wrecking ball. 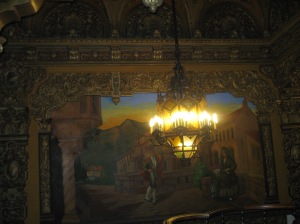 In addition to the busy scrollwork and glitz of many old theaters, this one had Spanish murals: bullfighters, ladies with mantillas.  Kansas City has plenty of Spanish-themed architecture, so I felt oddly at home.  My own place has a southern European red tile roof.

It was still hot in the theater.  We’d all been sweating, taking our hats on and off.  The theater’s air conditioning was not on, but it was certainly cooler, in a dark, interior space.  Only a few lights were turned on.  Another volunteer led us up into the balcony to listen to the final bit of audio, in which the inventor would lose his mermaid.  He lost her.

On the way back to the ferry, to say goodbye to Manhattan, I walked past a shop that was covered in a metal grate.  It was Sunday.  Under the grate, I could make out a bunch of handwritten signs.  “One person with courage makes a majority.”  “Sometimes we have to reach out.”  “Destiny is not a matter of chance….”

For some reason, the Staten Island Ferry always reminds me of death.  For the ferry, you wait, in a big, blank-looking area, all kinds of people, crammed together, and, for the most part, behaving quite well.  Waiting to cross the water.  Unlike subway stations, which are small, dark, grimy places, with wooden benches and bejeweled mosaics, the ferry station is bright, open, with giant, sans-seraph letters making announcements, and cool, white surfaces all around.  Subway stations are bunkers, and the ferry station is like a hospital.  We crossed back to Manhattan.  I took the west side of the boat, as you always should, to see the statue.  I held onto my hat, and the wind blew, and people took photos, as they always do.

From my tour, through the Guggenheim’s stillspotting series, Staten Island edition