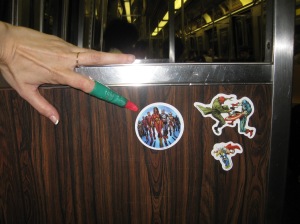 1. Man working snack bar in Staten Island Ferry waiting area, after handing me $16 in ones, says,  “Sorry about that.”  He looks me over. “Hey, now you can go to a topless bar!  That’s what you’ve been waiting all your life for, right?”

2. Walking through Times Square, I am telling my companion that current times are not nearly as contentious as the 1960’s.  Man next to me at the curb, who is also waiting for the light to change, turns to me and says, “Yeah, this aint nothing like the ’60’s!”  Thanks, man.

3. Cab driver from Manhattan to Brooklyn screams, in unidentifiable accent, at car behind us: “Go around!  Go around!  What are you, stupid!”  And proceeds to insist that we pay him in cash even though there’s a card reader right in front of us.  Classic.

4. Standing at half-price ticket window in Times Square, ready to buy “Porgy & Bess” tickets, we realize we are short $20 cash.  Show begins in ten minutes.  I stand there pretending to look for more money as my companion runs off to the ATM.  “Two minutes!” guy behind us says.  They are about to close.  “Hurry!  No one else can buy tickets until you’re done!” someone behind me says.

“We take credit,” the clerk volunteers.  I swear, TKTS used to be cash only.  I swear.

5. Hat salesman frolicked through at least half an hour of us trying on almost every hat in the shop.  I knocked over a little hatstand that looked like a mini bowling pin.  Then I did it again.  “I knocked over like eight of those during my first shift here!” hat salesman chuckles.  “And it was only a four hour shift.”

She tells us that this hat company is opening another location.  “In Minnesota!” she says.  “Is that near Missouri?”  That’s the cutest thing about New Yorkers.  Don’t worry,  Dear friend buys three hats.  One for me.

6. Woman at MoMA, at least seventy years old.  Head shaved except for small patch of bristles on the back–those are dyed fluorescent green.  Her clothes were gorgeous and interesting, too, but I didn’t want to stare.  I’d gotten all I needed from her awesomeness.

7. The maid at the Park 79 hotel who packed up all our stuff and hauled it down to the storage room next to the lobby.  I messed up our checkout date.  I’ve never done that before.  I swear.  (It was only 1 am.  We were tucked into another hotel within an hour.)

8. Girl of about 9 at brunch in Park Slope, wearing a gleaming white satin dress with a few tasteful rhinestone accents.  “She looks like a princess!”  I told my brunch companion.  Girl heard that.  You bet she did.

At my table, we proceeded to draw on the paper tablecloth and experiment with the sugar-in-the-raw cubes, setting a terrible example for the girl, and her brother, who clearly wanted to play with sugar cubes, too.  Sorry, Mom and Dad.

9. Woman seated next to me at “Porgy & Bess.”  She is in college studying drama. She just started.  And this is her first Broadway show.  Isn’t it amazing?  Isn’t the theater beautiful?  She hopes she won’t cry too much.  I assure her that crying in the theater is wonderful.

At intermission: she’s been practicing Chekhov exercises in class.  She can see how those are working on stage!  Isn’t the show amazing?  It is.  Her gasps and enthusiastic applause make it even better.

10. Two sixteen-year-olds on R train at midnight.  Bra tops.  Short shorts.  Unnaturally colored hair.  Lots of jewelry.  One skinny, one round.  They are Going Out, and yes, they meant to look like that.

11. Child of eleven months in line for Shakespeare in the Park tickets in Central Park.  I thought she looked Persian, not that I could tell you why.  Chubby cheeks, curly dark hair.  Baby enjoys slightly-too-loud lady, also in line, and loud lady’s game of throwing rocks into the center of a rubber band.  “You can make a toy out of anything!” slightly-too-loud lady says.  Baby laughs and bounces at everything lady does.  Unfortunately, parents leave spot in line to join friends who are behind them (that’s the rules).

12. (honorable mention) Hat that flew off my companion’s head while we were pedaled down Fifth Avenue in a pedicab.  Hat lands in the middle of center lane, northbound.  Hat sits innocently, not seeing the bus that approaches.  Hat disappears forever under this bus.  (Will he be united, in some mystical way, with the shoes I once accidentally left in nearby St. Patrick’s, fifteen years ago?  Was someone praying for a hat as I imagined someone praying for a pair of size 8 loafers?  We’ll never know for sure.)

One thought on “New York’s Most Beautiful People, August 2012 Edition”