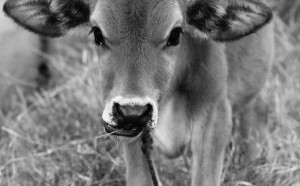 The first cow I remember was the one on top of the Zarda ice cream shop.  The ice cream was fine.  I always got chocolate in a regular cone.  The best part: the padded stools on shiny pedestals that went around and around.  There were some oxen eternally pulling a covered wagon in front of the shopping center we frequented.  It was colorfully painted.  It just reminded me that we lived in a place that people, historically, looked around our area and redoubled their efforts to reach the west coast.  When we went on vacation and told people we were from “Prairie Village,” they often asked about cows.  The closest I had gotten to cows was holding kittens in my great-grandparent’s empty barn.  Cows used to live there.

The Livestock Exchange building was an important building when it opened in 1910.  That was an important area of town.  Across the street was a newspaper covering the cattle trade.  Farmers and people who dealt in animals were important in the city then, not the odd visitors they are for our once-a-year rodeos and displays.  When I visited the building recently, I kept imagining the smell.  Walking up and down the hallways, frosted glass windows and hundred year old doors, even some of the hundred-year-old telephone numbers remained, with their adorable black and white movie alphabetic prefixes.

The smell of the people and the cows in summer of hundreds of cattle, when all those windows had to be open.  The heat, and the smell.  When people were wearing suits and long skirts.  The smell in 1910, 1920, 1930, 1940.  All those years, with the real smell of real animals that you really ate on a plate at the end of the day.  All those years before the world was airtight indoors, when indoors was only pleasant in winter.  A cowtown.  When I flew home from the middle east, the plane smelled like it was full of living people and perfume, like I thought of frankincense, how it was from that part of the world.  I had never realized that a plane full of Americans smells like Proctor & Gamble.  Close your eyes, and are you surrounded by humans or products?

In 1923, more than two million cattle visited Kansas City’s stockyards.  About half of these animals were killed and eaten in Kansas City.  The other half were loaded back on trains and sent to another, final destination.  That year, the stockyards also greeted more than two million pigs, over a million sheep, and a bunch of calves, horses, and mules.  From the late 1800s until the flood of 1951, millions and millions of animals were in and out.  The stockyards were one of the first steps toward large scale use of animals for food.

Temple Grandin has become famous for building more humane animal handling systems.  She is particularly in tune with cattle, by virtue of her autism.  When I came down with an anxiety disorder a while back, her description of overstimulation and overwhelming fear made a lot more sense to me.  I even tried to wrap myself up during an anxiety bout, the way Grandin learned to wrap herself in a firm pressure to manage the boiling over of her nervous system.  A hotel bedspread swaddling me, I felt just as terrified, and a little hot.

In the last couple of years, a lot of meat eaters have decided they want to get in touch with their meat.  Beautifully parodied by “Portlandia,” they want to know where their meat came from, what the animals’ home was like.  To me, this seems sort of like walking up to a guy in the electric chair and chatting him up about how he felt about his prison duds.  Less weird are people who go out in the woods and shoot things and eat them.  The last thing I want to do when I see an animal is kill it (spiders and roaches excepted, and hardly edible).  But I hunt for clothes and shoes and books.  Hunting can be quite a thrill.

When I was growing up, ground beef was the main meat we ate.  Hamburger for tacos, for spaghetti sauce.  We used beef for ruladen.  Beef came on a Styrofoam platter, wrapped all around with clear plastic, and when you dumped it on the skillet, it took time to warm up and break up and go from more pink to more brown.  I stopped eating meat when I was sixteen.  I saw a bunch of PETA stuff, and I was easily converted.  Animals were nicer to me than people, for the most part.  And I didn’t want death in my mouth.  Vegetarians tend to be even more afraid of death than the average person.  If I avoid death, maybe it will avoid me, right?  At least I could avoid thinking about it.

Some vegetarians want to know all the facts about their food so they can avoid any contamination.  That’s not how I feel.  If I notice I’ve accidentally eaten some meat, or I have to eat something with meat garnish or beef broth to keep from going hungry, I just mentally apologize to the cow.  Sorry, dude.  Shit happens.  Any cow who’s been through a feed lot will know that.