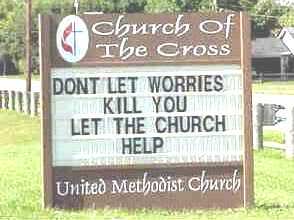 This week, I hate Mary.  It’s all so easy for her, isn’t it?  God gives her a kid.  She already has a great fiancé, the kind of guy who believes you when you say God knocked you up.  Let’s not forget: she’s about to become one of the top ten subjects of representational artwork on planet earth.  You hate her now, too, right?

Most of the commentary on Mary is about how obedient and willing she was.  She tells the angel, “Okay!  I’m a huge fan of God!  No problem!” There is no eye-rolling, no laughter.  Mary isn’t one of those smart-ass Bible characters who argues with God.  Abraham, Sarah, Jacob, Moses, David, Jesus’ uncle Zachariah—schemers, liars, negotiators, skeptics.  Those are characters I can relate to.

I recently watched “The Bells of St. Mary’s.”  I enjoyed it, but I’m not going to love a movie in which someone begs for a favorite student, “Why don’t you just pass her?”  Oh, Father.  I have six hundred pages of finals to grade in the next two weeks.

At one point in the movie, someone answers a question with a story.  That’s so midrash, so noir, so snappy.  I thought, I wished I answered more questions with stories.  I rarely stop, take a breath, pat someone on the arm, and say, “Let me put it this way.  Once, there was a man….”

Maybe Mary had below-average verbal skills, or learning disabilities, or a slow processing time.  Maybe she was “two shakes short of a lamb’s tail,” or “not as smart as this table right here.”  Maybe she was dumb.  Perhaps she didn’t leap in with questions or suspicion was because she didn’t think things through that deeply.

One of my favorite writing teachers uses the word “dumb” all the time.  She preaches that if you’re not dumb– that is, open, curious, humble– then you can’t get to the heart of anything.  You’re too big to fit into the small hearts of places and stories.

Our Old Testament passage was about David.  I like David.  He was a spaz and a sex addict and great dancer.  David takes a notion to build a temple once he has gotten himself settled in a nice house.  He tells Nathan to let God know that this is the plan.  In response, God lets Nathan know that it is not the plan.  That God’s plan is about giving David a home.  I’m okay in a tent, God radios back.  Cool it.  I’m planting you, right now.  Stay put, dummy.  I’ll be in touch.