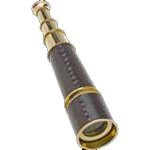 “Oh, how I wish I could shut up like a telescope!  I think I could, if I only knew how to begin.”  For you see, so many out-of-the-way things had happened lately, that Alice had begun to think that few things indeed were really impossible.

I felt a push and pull, of claustrophobia and agoraphobia.  That is, space around me seemed to push in and pull out.  I was at a conference.  The little meeting rooms felt like the trash compactor in “Star Wars,” and fleeing outside, under the warm, blue sky, felt like being untethered from my space ship.  You can breathe, but why bother?  You’re gone.  No gravity.  Very few things are impossible.  My brain’s sense of danger malfunctioned.  Inside, it told me: buried alive!  Stuck!  And outside it told me, hide!  A telescope, collapsed, poses no danger of showing you what is far off, what needs to be prepared for.

It was all very well to say, “Drink me,” but the wise little Alice was not going to do that in a hurry.

The first time I felt alcohol in my blood.  I stood up from my barstool.  I was always so worried about being safe, about presenting myself as strong and clever.  I walked to the bathroom in the back of the restaurant, and I thought, Look normal.  I was on a second date.  The man had ordered us a bottle of wine, an indulgence I found intoxicating, both literally and figuratively.  When I returned from the bathroom, I poured the last half-inch of wine from my glass down my throat, and slammed the stemware back on the bar so hard it broke in two.  I was mortified.  He laughed, affectionately.

She waited a few minutes to see if she was going to shrink any further: she felt a little nervous about this, “For it might end, you know,” said Alice to herself, “in my going out altogether like a candle.  I wonder what I shall be like then?”

There was a poster of the cow Chagall in the room where I realized I was going to die.  It was my great-grandmother’s former room.  She had moved out to live with my grandparents, and taken the living room for her bedroom, and pretty quickly she had gotten sicker and died.  That great-grandmother was the only grandparent I spent a lot of time with, just the two of us.  I slept on her floor with my blue plaid sleeping bag, and at the cafeteria in the bottom of her apartment building, I ate Knox blocks and fried chicken.  My favorite words that she used were “evidently” and “gooseberry.”

She wasn’t in that room anymore, though, because she was dead.  When she died, I thought, well, she’s old, that’s what happens.  Grandmas die.  In her room, a year later, I thought, I will get old, and I will die.  I was so afraid I didn’t know what to do.  I knew I shouldn’t bother waking my parents.  What could they do?  I knew I was alone.  What did Chagall know?  What was he saying about cows?

She ate a little bit, and said anxiously to herself, “Which way?  Which way?”  holding her hand on the top of her head to feel which way it was growing, and she was quite surprised to find that she remained the same size.