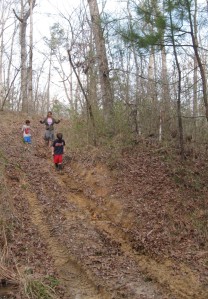 I’ve encountered some great teachers lately.  I went out Friday night.  It took me about an hour to decide what to wear.  My back had gone “oh my aching back” again, making me feel about 10,000 years old, and I couldn’t find anything that made me look so fabulous and interesting that it distracted from me being 10,000 years old.

Eventually, I made peace with an outfit, and I met up with some friends for wine.  Half the time they were talking, I was thinking, what are we doing next?  Why are we talking about this?  I was depressed about being 10,000 years old and thinking about dying alone.

I got up to go to the bathroom.  I happened to walk past a friend who was eating at another table.  We said hi.  Her little son looked at me with his huge eyes, he has like benevolent, almost alien eyes, and threw his arms open.  “He wants to give you a hug,” my friend said.  The kid immediately crawled over the grown ups and hugged me like he meant it.  I hardly even know this kid, to tell you the truth.  I’ve met him exactly twice.  But, man, I felt better.  I felt like I had bumped into the Dalai Lama.  Much better.

I went to a three-year-old’s birthday party today.  I was still kind of grouchy because for some reason the water was off at my cottage.  I assumed this was the fault of my neighbor, who is maintaining our utilities and grounds in this bizarro world we’re in, since my landlord abandoned us.  I was cursing him to high heaven, as I had only the day before asked him if the utilities were good to go.  Sure, he said.

Why couldn’t I stay in the lovely, easy suburb where I was raised, where no one ever had their utilities turned off, and no one ever squatted in an abandoned house, and no one left televisions sitting out on the lawn or had to watch lunatics sweeping the sidewalk for twelve hour stretches?  After an hour, the water came back on.  Whatever.

The three-year-old birthday girl is the best birthday girl I know.  Every time she opened a present, her eyes pulled open wide, and when the item was revealed, she exclaimed, “Wow!” even if she couldn’t tell what it was.  Everything pleases her.  She’s honored by having a birthday, and she’s enchanted by the process.  Then when she’s got them all open, she says, “Bye!” and waves at us all.  Rather callously, we did not go home, but remained and ate second cupcakes and played with her new toys.

Preschool kids are good at teaching openness and enthusiasm and affection.  And they teach by example, which is the best way.  When I walked away from the little boy who hugged me, he called, “Don’t forget my birthday!”

“Oh, when is your birthday?” I asked.

“January.”  Last lesson: it’s never too early to look forward to something.