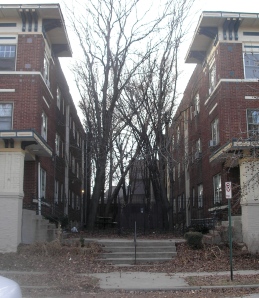 Everyone was as still for Bach as they were bouncy for Al Green.  As rabidly as I’d danced to the Jackson 5 Saturday night, I sat still for Bach on Sunday. I closed my eyes, even.

Pop music goes forward, neatly, in a way you expect, and it reinforces what you want and where you thought you were going.  The mass does this, too.  There will be peace with you.  There will be holy, holy, holy.  There will be body of Christ.  You’re never going to walk in there and hear them switch it up.

Bach goes in circles.  He starts going in circles, and then winds up when he feels like it.  I wondered about his world.  The state, the organization of things, was choppier then.  But your social world was so much more regimented.  You generally became who you were born to be.  I wasn’t born to be anyone, in particular.

I watched “Peggy Sue Got Married” between concerts.  It goes in circles, and it goes forward, neatly, in the way you expect.  I’m 34, not quite as old as Peggy, but I felt her astonishment at walking into her childhood home.  I dream of mine, often.

Time travel movies ask: what could be changed, but how different would things really be?  Sure, McFly can punch Biff, but he’s still your dad, and he loves you, and he’s just as weak and strong as dads are.  It doesn’t really matter that he’s more chipper in the revised 1985.

Peggy has to go back to understand her husband.  To understand meant-to-be.  That’s the pop song part.  That’s what you expect.  How else can you regard the significant people in your life, but as meant to be?  Anything less would be frightening.  Time travel stories require both forward meant-to-be and circles.

There is no big decision in my past that I can imagine making differently.  Maybe I’m too young.  All I can agree with Peggy about is: you love who you love, the way that you love them, and there’s no redirecting it.  You love grasping, or openly, or nervously, or bitterly, wishing he was someone else or that you were, loving against good sense, or only in mind, or mostly in body.  And there just isn’t much to be done about it.  That is what happens, and it’s best, I think, to go with it more than you fight it.

There were violins playing Bach today.  I used to play.  I remember people joking about having a circular bow, so that we wouldn’t need to worry about bowstrokes anymore.  In the orchestra, the motion of your bows is decided, and then everyone’s supposed to go that way.  It’s not part of the music—it just looks better.  If you had a circular bow, you’d just go around and around.