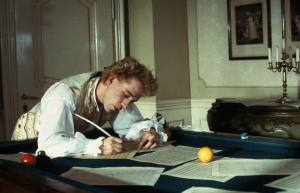 When I was in about sixth grade, we got a VCR.  Suddenly we could control what was on our television!  You could watch whatever you wanted as long as it was “The Wizard of Oz,” “I Love Lucy” episodes, or “Amadeus.”  Those were the only videos we had.  “Amadeus” features such haunting images as an old man dripping blood from a suicide attempt and a slumped corpse being thrown into a pauper’s grave and covered with lime.  (I asked about that and learned what lime was.)  The movie, frankly, scared me to death.  Those parts, and the part when Mozart’s wife progressively gets louder, “Wolfi… Wolfi?… Wolfi?!”  He is pale and limp.  Dead.

The film taught me many valuable lessons about being an artist, though.  I have, over the years, found myself reciting lines from it, and acting out little gestures, without even realizing it.  Such is the power of childhood imagery.  What did I learn?

1. Being an artist means being a little crazy. Mozart runs in the film in his first scene, chasing this woman with abundant cleavage, and talking backwards to her.  One thing he says is, “Kiss my ass.”  Shocking to my young ears!  Clearly the woman likes him for being so wacky, though.  That was promising.

2. Work hard; play hard. Mozart composes like a bullet train standing at his pool table  (occasionally sliding a billiard ball away, and letting it roll back).  Then at night he goes out and dances and screams and laughs all night.  That looked pretty fun.

3. Artists have a selfish core. The truth is, if you want to make things badly enough, there are days you’d run over your own mother to get where you want to be.  If you date an artist, at some point you’ll end up saying, “Just let me be near you while you work,” as Mozart’s wife does.  Poor wifey falls asleep at the table.  He goes out partying, without telling her.  Why aren’t you fun anymore? he asks her at another point.  I guess because she’s the one who gets to worry about paying the rent and feeding their kid.  I’ve been on both sides of that.

4. You will be haunted. In the movie, Mozart is haunted by his dead father, and Salieri is able to play upon this to drive his nemesis crazy.  The best way to get working is to get haunted.  Haunted by your past.  Haunted by the work of someone else.  Haunted by some image or theory that no one else is likely to care much about.

5. You’re either fighting God, or full of Him.  Salieri is dried out, broken up, bitter, fighting.  Mozart is, mostly, just cranking it out, and completely sure of his brilliance.  To the point of seeming like a real arrogant fuck.  Artists go back and forth between those two states.  Sometimes in the same hour.

6. You have to be who you are.  Although Salieri spends the whole movie angry he’s not Mozart, in the end, he blesses mediocrity.  I had to slowly accept that I was not a savant.  My teachers and parents told me I was amazing and wonderful, and I kind of believed them.  But I was not, am not, Mozart.  Most people aren’t.  I’ve loved and treasured books by people who are just okay writers.  They meant something to me because we shared a sensibility or certain experiences, or because they write some wish-fulfillment of mine.  How awful if they had sat down and never written because they weren’t Mozart, or Melville, or Shakespeare.  Much as I love the heavy hitters, the godfathers in the pantheon of art, they still leave room for smaller, nearer voices.