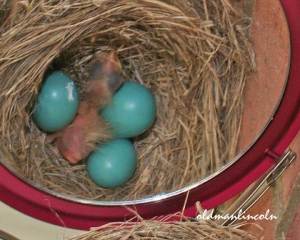 Our backyard, other than the patio area, was politically zoned to children.  We were administratively, and physically, its masters.  My dad put up a swingset, which was never properly anchored.  When you pumped a swing hard, or got a trio of folks on the glider, one or two legs would thump out of the mud, providing the sort of dangerous pleasure that makes childhood worthwhile.  Around the corner, between our wooden privacy fence and the neighbor’s chain link, there was a sort of trail, which we used for red wagon safaris.

On the other side of that privacy fence, on the side by the house, there was a dead bird.  This was after my dad had moved out.  The dead bird set a vaccuum of fear on that spot.  No one picked him up and disposed of him.  He just stayed there.  Regularly, we went by to look at him, and scare ourselves.

At recess, at school, we were also left to our own devices.  We formed secret societies, and loved and hated each other.  We sneaked into the creek, where we might be swept away by a tidal gush.  Now there is a big fence back there, so the kids are denied such fun.

I was once given custody of the class’ hermit crab.  I found the creature disturbing, his chunky, meat-colored claws, his lack of a face, and then his reliance on a shell.  (What was he without it?  The question rang hauntingly in my mind.)  I was so enthusiastic about having a pet of my very own, though, that I overlooked my complete lack of affection for said pet.  I was already secretly regarding my room as my “apartment.”  My individualism ran pathological, early.

I wasn’t exactly sad when I came home one day to find the crab’s cage empty.  It was scary to think about finding him unexpectedly (in your shoe! under the bed!)– especially because I had a terribly messy room.  He eventually appeared in the dining room.  Our dining room was down a hallway, a flight of stairs, and across the length of our reasonably-sized kitchen.  Mr. Crab (can’t recall his name) was also dead as a doornail.  A cat was implicated, though never convicted.

Was he really alive?  All he did was move his Terrible Claws.  He didn’t seem to think, therefore be.  Was the bird alive?  What was he then, in the backyard?  Did children ever, actually, get swept away in creeks as B. Cautious Beaver warned?  Death barely brushed me, in those years.  The closest it came was the death of my parents’ marriage, and that was a strange sort of encounter, far out of the natural order of things.