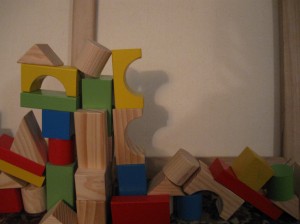 At my elementary school, there were these huge trees with deep scoops in the trunks, and great gaps between the roots.  We would build little lean-tos with twigs and leaves, and called these fairy houses.  Carl Jung used to futz around with blocks, building a castle, and then a real dwelling for himself, echoing the childhood play that nourished him.  He was rebuilding himself, or sorting himself out, with the blocks.

In imitation of Jung, I bought some blocks, and built five or six small structures on my living room carpet.  I might use some of the compositions for paintings.  I might just goof around with them.  It’s summer, and I’m rebuilding myself.  Although I wanted to make one big wall or fortress, I ended up with a village of buildings.  Just like in my writing, I often try to roll out a castle, and end up with cottages.  That’s just who I am.

Last night, I rented “The Bourne Identity,” which I had never seen.  It reminded me of “The Muppets Take Manhattan.”  Stay with me here.  Kermit gets hit by a car and loses his memory.  He adopts this alter ego, “Phil,” who has no feelings for Miss Piggy and no gleeful goofiness.  Eventually, Piggy throws him against a wall and it all comes back, bang!

Similarly, in “The Bourne Identity,” an alarmingly young Matt Damon does not know who he is.  Bourne’s ultimate revelation is less pleasant than Kermit’s.  While Kermit awakens to a network of loving friends, Jason Bourne awakens to his violent instincts, homicidal social connections, and his own cowardice, er, conscience.  On the plus side, Bourne has the physique of an A plus certified movie star, especially compared to Kermit’s skinny, pot-belly figure (no offense, buddy).

Real-life amnesia is apparently quite rare.  The process used in all these movies and all those soap operas is recognizeable, though.  Sometimes you get to a place in your life where you hit a wall: who am I?  I don’t make sense to myself.  You bumble around on instinct, wary and thoughtful.  And then it often comes in a flash: whoa!  That’s me!

While you are lost and seeking yourself, there is a freshness to the connections you make.  Kermit playfully throws himself a name, “Phi,” to his friends’ Jill, Gil, and Bill.  He works his repressed, snide side for a while.  Bourne kisses the girl, as if it’s all new to him, and probably everything else feels new, too.  Sadly, the film is PG-13, so we largely have to use our imaginations.

As lost as they both might feel, Kermit and Bourne are recognizeable to the audience.  Kermit retains his ambition and his crowd-pleasing instincts.  Bourne still knows how to work a stick shift and kill with a ballpoint pen.  Getting a solid case of amnesia ultimately helps them.  Kermit’s disappearance motivates his friends to step up and take up some of the burden of leadership.  They were taking him for granted, and he didn’t have to do it all himself.  Bourne has time to absorb his new moral stance.  Losing your mind does have its advantages.  Or, in one of my favorite turns of phrase, “He who loses his life will find it.”