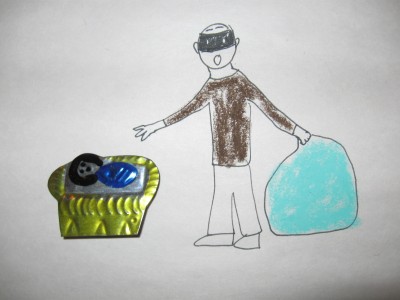 Since… there is a ‘law’ governing the amount of crime in a society, moral responsibility for crime must lie with society and not with the individual criminal.  “It is society that prepares the crime and … the guilty person is only the instrument who executes it,” is the rather dramatic way he expressed it.  People who murder– like people who marry and people who commit suicide– are only fulfilling a quota that has been preset by social conditions.

I don’t think things have to happen as they do.  I think other ways of things happening might exist, in some sense of existing, somewhere else.  I often imagine the alternate ending to my day, or the alternate ending to my resolved conflict, in some kind of Choose-Your-Own-Adventure way.  Especially now, when the roads are bad, I pull up my driveway, and I think, what if I had crashed?  What if I was in the ER right now with a broken leg?  Am I dead in some other version of my life?  Is there a ghost-type me living that ER storyline and falling in love with my doctor?  This is the kind of thing that drives people to write fiction, of course.

I like this bit about Quetelet because he’s an early statistician.  Statistics are one way we have of trying to put a rope around the world.  Having worked in statistics for four years, I learned that the rope of statistics is hardly better than the rope of anecdotal evidence or personal experience or tradition.  It was interesting to learn the knots and how to lasso things, but I’m permanently distrustful of most statistics.  Quetelet was in a new field, though, and he didn’t even know what the rope was made of.

Are we all responsible for crime?  I believe we are.  Would I be a criminal if I lived with a crummy education, abusive caretakers, and/or persistent, unmet physical needs?  I think I might be.  Are crimes unavoidable?  Are criminals puppets?  Well, okay, Quetelet’s merely a pioneer, musing along the frontier.

One tends to learn infinitely more from the bad than the good, and one learns nothing from the brilliant. The brilliant is born out of a writer’s pain, some divine inspiration, and a slight bit of madness.  You can aspire to it, but you can’t plan on it, especially if you know your limitations.  Your horizons can expand, however, if you allow yourself the possibility of failure….

You can’t use the brilliant as a guideline to follow because there are no signposts along the way…. You could learn a lot, though, from the mediocre and the bad.

I have almost no interest in Neil Simon’s plays, but I was wild about his memoir, and I have read it at least twice.

There’s  fine line between constructive analysis and heads-up criticism.  As an artist, I don’t ever want to be involved in criticism for criticism’s sake.  What I mean is: I take things apart to help myself understand, and for no other reason.  It’s not to sort the world into “good” art and “bad” art.  When I say “good,” I just mean, “I like it,” and when I say “bad,” I mean, “I don’t.”

The kind of analysis he’s talking about, the figuring out what doesn’t work in a mediocre or bad piece, is enormously helpful.  I enjoyed pulling apart “The Mysterious Case of Benjamin Button” last year because it was a rich tableau of narrative and structural gaffes.  (The flood!  Backwards time!  What happened to the bewitched clock?  The Luke-I-am-your-father trick?!)  There was a lot to think about.  I’m interested in why stories work, and why they don’t, because I want to build ones that work.

This should be very different from complaining about why I thought the movie sucked.  Or criticizing the people who made it.  They tried, and that’s cool.  That’s all you have to do when you make stuff.  Just try.

It’s frustrating, though, to figure out why Huck Finn works, or why The Tempest works.  There are lots of elements in powerful, classic works that should derail them, that should muddle them, but somehow, they don’t.  Who knows why?  Great works of art are mysteries.  All you can really do is look at them and say, “Wow.”

You come along… tearing your shirt… yelling about Jesus.

Where do you get that stuff?

What do you know about Jesus?

Jesus had a way of talking soft and outside of a few bankers and higher-ups among the con men of Jerusalem everybody liked to have this Jesus around because he never made any fake passes and everything he said went and he helped the sick and he gave people hope.

…You slimy bunkshooter, you put a smut on every human blossom in reach of your rotten breath belching about hellfire and hiccuping about this Man who lived a clean life in Galilee.

…you’re only shoving out a phoney imitation of the goods this Jesus wanted free as air and sunlight.

…You tell poor people they don’t need any more money on payday and even if it’s fierce to be out of a job, Jesus’ll fix that up all right, all right– all they gotta do is take Jesus the way you say.

I’m telling you Jesus wouldn’t stand for the stuff you’re handing out.  Jesus played it different.  The bankers and lawyers of Jerusalem got their sluggers and murderers to go after Jesus just because Jesus wouldn’t play their game.  He didn’t sit in with the big thieves.

“To A Contemporary Bunkshooter” by Carl Sandburg, Complete Poems, Harcourt, Brace and Company, 1950.

Maybe this is one of my favorite poems, although I don’t much like poems that are political or overtly religious or ranty. Somehow this poem is all that stuff, and I love it.  I typed it up and put a copy on the door of my dorm room at my very Jewish/agnostic college, where I was a nonpracticing Christian, and where surely if anyone noticed it, they would be like, what the hey?

Sandburg was addressing the preacher Billy Sunday in this diatribe, written in 1916.  Sandburg was a good old socialist who is now often portrayed as a safe, kindly old white man who wrote poems about muscular large cities and adorable natural phenomena.  But he wasn’t nice or safe.  He was a socialist, which apparently is so terrifying today that people still write it on protest signs right next to “terrorist.”  Whatever, guys.

This seems especially timely with all that ridiculous prosperity gospel business going around again.  Yep, nothing leads to prosperity like giving up your possessions, concentrating on spiritual matters, and tending to the poor and outcast.  Take it from ol’ Jesus of Nazareth!  I don’t know Sandburg to be particularly religious, but he certainly sounds pissed that people were using the Jesus brand name to scare and manipulate people.  I don’t think you have to be religious to find that offensive.