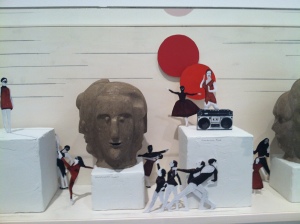 “The gallery is upstairs,” she says.  It was PSAT day, thus I had a moment to flit away from school and look about.  I love the PSAT even more than I did when I took it and it led me to be offered lots of money for school which I was too young and foolish to take.

Up and around the corner of this Chelsea gallery, and it sounds like merry-go-round-broke-down is about to come off its tracks.  What?  Around another corner, and “Metal” is the piece: two guys sitting on a slightly see-sawing contraption, hitting blocks of wood.  I thought they were just making music, but they were pounding gold into a thinness to be used on sculptures for the artist in the future.

There are other people in the room: four people playing madly on various cymbals.  They stop when there’s a loud gush from a speaker, and they start setting what look like tiny pink vibrators next to or inside the cymbals, to make them play on their own.  There was a score, they were doing things I didn’t understand, but they had a plan.

The walls have words painted, including: muscles.  And some letters, epistle-type letters, in French.  I sat for a while as this madness went on, until the clangy banging was enough.  I get quite a bit of that riding the subway.

At Marcel Dzama’s show I didn’t love taken-apart cases of stuff so much like Marcel Duchamp’s boxes, even with little painting trading cards, one dedicated to Duchamp, with chess pieces, but they looked only pale imitations to me.  They just made me miss Duchamp, one of my loves.  I much preferred Dzama’s dioramas, which had witty paper people prancing around heavier sculpted heads.  And his wall of video, which showed a dance battle against dead chess pieces, led by zombies in black and white polka dots, which I also happened to be wearing when I watched them.  I danced a little, when the one other woman in the gallery had gone around the corner.

My last stop was Gallery Shchukin: Russian work from my favorite era, early 20th century.  Loose, humorous drawing of dogs in Constantinople (who knew they had dogs there?) a couple of Kandinsky’s pieces I liked just as well as any of his work, not too blurry or out of control as he got later, he still allowed himself some sharpness. 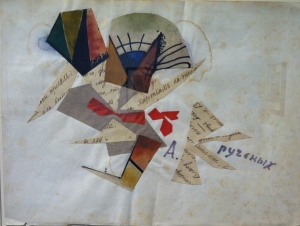 A brilliant collage piece  by Aleksei Kruchenykh with amazing water stain, dust spots, bow tie shapes and basketball hoop shapes working so well together.  1915, what a great time for art.  And the most gorgeous drawing of Paris I’ve ever seen, by Mstislav Dobuzhinsky.  Probably the red on the boats did it, not just the perfection of the scoops of boats and bridge arches and how they live together.  He’s pretty great, and more of his stuff is here. 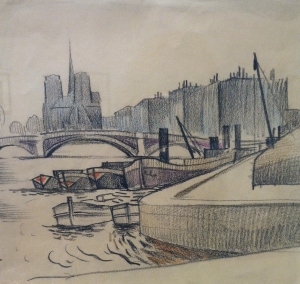 Top image is also Marcel Dzama, as you may have guessed.