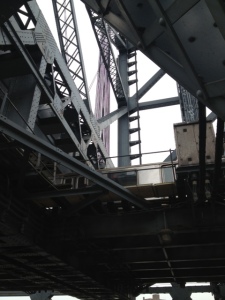 On the way to work this brown bulldog was walking towards me, not on a leash, just all by himself, and he looked at me, and we passed each other, and I felt this dog was a demon or a god in disguise.

That afternoon I took a ferry from Manhattan to Brooklyn after being told by the receptionist that I had mistaken the date of my appointment.  After being sent back down the elevator.  After, I tapped on the building’s facade as I had been told to, by the building’s owner.  I had never had a man tell me a building was his.  “So we can’t do anything to the building without checking with the city,” he said, because the building belonged to Theodore Roosevelt, Senior, father of that Theodore Roosevelt you were thinking of, man who helped found the Metropolitan Museum of Art and was “a man of good works and good times.”  I don’t know how else a person would want to be described.

I found this website where you count penguins for scientists.  I clicked on penguins, one, two, three, or was that two?

The next day I took the subway to the very end of Manhattan.  I was supposed to do one thing up there, but I missed it, and so I just got off the train not knowing what else to do.  There was a gorgeous old sign above the platform that said, “Next Train” and had an arrow which would light up to show which side, downtown, uptown.  The last stop is 207th Street.  I walked a few more blocks and there was a bridge to the Bronx, the very tip of Manhattan.  The bridge looked rickety.  I walked across it, in one place you could see through the empty spaces in the iron all the way down to the Harlem River, although in the moment I thought of it only as The River, I didn’t know what it was when it bent, it, the Hudson, bent around between the Bronx and Manhattan.  I was finishing Another Country by James Baldwin, I think he’s the only other person in the world as angry as I am, and in the novel a man jumps off a bridge, but I couldn’t remember which one, probably the GWB.

When people no longer knew that a mystery could only be approached through form, people became– what the people of this time and place had become, what he had become.  They perished within their despised clay tenements, in isolation, passively, or actively together, in mobs, thirsting and seeking for, and eventually reeking of blood.  Of rending and tearing there can never be any end, and God save the people for whom passion becomes impersonal!

I thought I would go back downtown and see the Apollo theater, or maybe some place James Baldwin used to live.  I climbed the stairs to the train, which is not sub way there, and a man was standing at the top holding the door for some reason so I said thank you.

I could also see Grant’s tomb, I thought, so I got off the train and went south and west, away from Martin Luther King, Jr. Boulevard.

Grant’s Tomb was closed from 11 AM to noon.  I didn’t realize it was ever closed.  I had seen the rotunda, and the words over it, “LET US HAVE PEACE.”

Across the street I saw a gigantic church, so I thought I’d try to hang out in there a minute and get warm, it was possibly snowing or very lightly hailing, it was hard to tell.

There was a group of musicians being photographed in front of the doors to the church, and I wasn’t sure I could go in, but I saw a woman come out the revolving door, so I quickly went in.  The stained glass windows were big and nice enough, but the walls were too scrubbed, too clean, and there was a dial in the pew you could turn for volume, some sort of listening device.  Only boring varieties of Protestants would care if you could hear well.

A choir was being coached, I listened.  They walked out, and another choir went up.  They were a high school choir.  They had a kid who sang the tenor introduction to one piece all by himself and it broke my heart.  Then they sang some Jamaican sounding song which was awful the way stark meter can ruin something.

I went back to Grant’s tomb.  The inside had some paintings of him, the two sarcophagi below, sort of like the Pantheon in Paris.  The Pantheon was the first place I went in Paris, I had only slept about half an hour, I was starving, the guy at the hotel had refused to speak to me in French, but told me my room would not be ready for an hour, and I thought I would die, instead I went to the Pantheon and wondered what the hell was going on there, a pendulum, a bunch of atheist stuff, graves, it was terribly confusing, like all of Paris.

I wondered what was so great about Grant.  The park ranger at the desk had his head so deep in whatever he was doing that he didn’t seem to be there.  I read the brochure.  I saw people had left prayer cards next to where the bodies of Grant and his wife had been put.

I crossed the street to the visitor’s center.  My shoes were getting quite wet.  I bought these moire flats just before Easter and wore them on Easter, although at the time I did not know they were moire, I thought they were that fabric which has a pattern like woodgrain and is delicate and you should not wear in a wet and muddy Easter egg hunt, even though that is what I did do.  And now I was doubly injuring the shoes, wetting them again, this time not in Kansas mud, but in New York rain, almost snow, or possibly light hail.  Such fabric is also called watered silk.

The visitor’s center was down stone steps, down closer to the river, this river, the Hudson for sure.  There was a gift shop, but no one.  A door opened and a ranger came out.  I went into the bathroom next, and saw she had left her cell phone on the toilet paper dispenser.  When I was done I took her phone out to her, and she said thank you.

She told me the next room had an exhibit and a movie.  She played the movie for me.  I clapped a little, she said, no one ever claps.

“They carried the Civil War veterans up the steps!” I said.

I walked around the room to read everything.  I choked up reading about how Ulysses S. Grant didn’t want to be a soldier yet failed at everything else he tried.  I missed my father terribly, and then my sister, as they are the people I know who also might cry at a National Park thinking about how gently Grant made peace with Lee and, you know, the Civil War.

And that as time went on, veterans of the Civil War gradually met to commemorate the war not separately, but together.

I went home, it took forever. 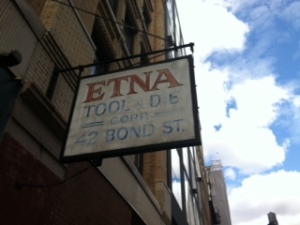 From an interview with James Baldwin, just after the death of Dr. King:

Baldwin: It is not the black people who have to cool it, because they won’t.

Interviewer: Aren’t they the ones getting hurt the most, though?

Yesterday I took this long walk in Manhattan from Chelsea to Chinatown, not because they both start with “Ch.”  Purple tulips, one lady with purple hair, one sign with a curl as one of its letters.  The townhouse Edward Hopper painted in, it is on Washington Square Park.  I climbed the steps to see the plaque that explained this, and stood on his stoop a minute.  I planned only to see things I hadn’t seen before, which was more difficult than I thought it would be.  I accidentally walked by the same pharmacy that always makes me think, what a fancy pharmacy, my doctor’s office, and a restaurant I ate in 1996.

Interviewer: Let’s talk about the average citizen, the white man… what should he be doing?

Interviewer: What should he be telling his neighbors?

Baldwin: That if I go under in this country, I, the black man, he goes too.

I asked three of my students what they thought about the trouble in Baltimore.  Two of them had opinions.  One of them knew someone in Baltimore.  One was like, what?  I told him to look it up.  I printed off that interview with Baldwin, and an excerpt from The Fire Next Time, and I sat and read both with a pencil in hand.

This is from The Fire Next Time:

Neither civilized reason nor Christian love would cause any [white] people ot treat you as they presumably wanted to be treated; only the fear of your power to retaliate would cause them to do that.

Five Bradford pear trees are blooming just outside the school, every time I go out they are there, a white not of purity or emptiness, but of unsplit light, these bloomed branches pressed against the sky so blue it is almost pink.  I walked under them, looked up at them, on my way to buy lunch for myself and a friend.

White people in this country will have quite enough to do in learning how to accept and love themselves and each other, and when they have achieved this– which will not be tomorrow and may very well be never– the Negro problem will no longer exist, for it will no longer be needed.

“It looks like it’s gonna rain,” one of my students said.

She looked again at the pink-blue sky.  “Oh, I guess not.”

Something very sinister happpens to the people of a country when they begin to distrust their own reactions as deeply as they do here, and become as joyless as they have become.

The thing right now is “deez nuts,” that is what the kids are saying, pretty much every day, someone, and today I said, “That’s so last week,” and a kid considered, accepted that perhaps this was true, the saying was worn out.

I saw also that my heart was full of little holes, pinpricks, and this is why it has trouble holding things, sometimes.

If the concept of God has any validity or any use, it can only be to make us larger, freer, and more loving.  If God cannot do this, then it is time we got rid of Him.