BEAST FROM THE EAST faces THE BROWN BOMBER

Round One: Halcyon days of my youth.  I drink apple juice in the AM.  My dad drinks coffee; my mom drinks tea.  Coffee makes a Dad-like, church-like smell.  Tea makes a dark cabinet, autumn rustle smell.  Coffee appears in Dad’s cup and on Dad’s breath.  Tea comes from a kettle on the stove that whistles, and then something you dunk in it.  Coffee is for boys; tea is for girls.  Coffee is for business; tea is for life.

Round Two: Age 12ish, I spend a little time down south.  Am asked at every meal, “Tea?”  My dad has to specially request “Yankee tea.”  This type of tea tastes like the kool-aid without the delightful reddy flavoring that is not precisely “strawberry” or any other “fruit.”

Judges say: Coffee, due to tea’s exceptionally poor showing, and early cultural isolation of the judge.

Round Three: After swing dancing for hours, I have a busted big toe, and I smell like the beer that has been spilled on me, but my swishy red dress still looks great.  Let’s walk down the street and hang out a little longer.  Order a mocha, I am told by boy I danced with who was dancing trained in an Austrian year abroad.  You’ll love it.

Judges say: Coffee.  I do love it, partner!

Round Four: Overseas in a Muslim, formerly British-controlled area.  Tea all the way.  I am treated to high tea at the Ritz-Carleton.  They have real, single-use cloth towels in the bathroom.  All the chandeliers you can eat, and floors more fit for eating off than any surface I’ve yet encountered.  I will have tea with milk.  All the finest varieties.  Pert sandwiches, tarts, and other delicacies still in their infancy, from the looks of them.  I would love to love you, tea.

Judges say: Coffee.  After such an impassioned rally on the part of tea, it is a crushing blow.

Round Five: In Rome.  Although some people keep raving about food I will eat in Italy, foodies tell me Rome is a culinary cesspool.  I am committed to cappuccino and red wine at every meal, regardless.  I’m on vacation.  First Roman lunch, at a place that bears a sneaky resemblance to a Jersey diner, first sip of first Italian cappuccino.  Ten minutes later, as my senses return to normal, I realize that in eight days I will have my last Italian cappuccino.  That will be devastating.  Such are the strange workings of the human mind.

Judges say: Coffee reaches deep down and brings out his best, which does not disappoint.

The final verdict: Had coffee not spent so much time in church basement styrofoam cups (ew), it might have made a better showing early on.  The ugliness of the suburban-issue drip coffeemaker, so unimpressive it did not even register, also left room for tea to get some momentum.

The early exposure of cold tea, much preceding the appearance of cold coffee, may have dragged tea down too early.  Cold drinks, other than milkshakes and martinis, just don’t grab this long-limbed, easily chilled judge.

At least tea knows all the stops were pulled, and the entire force of the British empire was called in.  Tea can’t have any regrets. 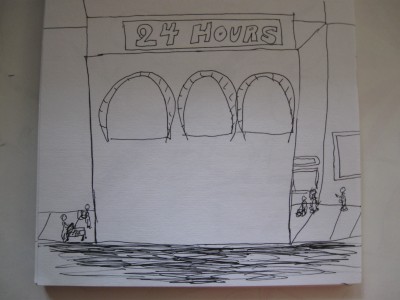 Most of the time, when I go to the grocery store, I think about Gorbachev.   The Threat of Communism is something I vaguely remember, and the vision of a Soviet store where there is one kind of toothbrush (ugly, straight, and red) and one kind of bread (brown) has a firm place in my imagination.

Probably people born five or ten years after me don’t have these ideas as anything other than textbook asides, crammed into the last week of the school year.  (The Soviet Union existed for most of my grade school career, but didn’t make it to middle school.)

The most wonderful place in an American capitalist system is the supermarket.  I usually call it the “grocery store,” but you know a grocery store could be a place with a grocer, who actually sells you your food, or knows something about it.  No one at the supermarket knows anything.  They are just working there.  The thing is, a supermarket offers you such great bounty that there are not questions to be asked.  You don’t have to inquire, as Gorbachev did, Are there any toothbrushes today?  There are.  There are 83 toothbrushes, and you only need one.

The ceiling is outrageously high for no reason.  The approach to the place often has some Temple of Dendur-style colonnade.  Everything about the place is designed to prove to you that not only is there enough food here, there is so much food, you can strengthen and/or fatten yourself up until you feel like stopping, if you ever do.

Then you go inside, and the part that always inspires me with capitalist pig pride is the outrageous number of choices.  Would you like orange juice?  Maybe you want to squeeze it yourself.  Maybe you want it condensed and frozen.  Maybe condensed and bottled.  Maybe you’d prefer it ready to pour and bottled.  Would you like calcium thrown in?  Extra vitamin C?  Pulp?  No pulp?  What size?  Glass or plastic bottle?  Fake orange juice?  Juice boxes?  Refrigerated now, individual size, or bigger to take home later?  Name brand or generic?  Organic or filthy conventional?  It’s morning in America, indeed.

(I thought this was a grocery place?  It is, but you can also get drugs and cleaners and pet food and liquor and holiday decorations and plants and office supplies and possibly folding chairs or beach balls.)

I guess I could still compare our supermarkets with Cuban stores.  The trouble is, I think of Cuba in terms of cigars and old cars and palm trees.  I know the Cubans are suffering, but their suffering doesn’t turn me on the same way Soviet suffering does.  Maybe I’m mixing a Russian style of suffering, garnered from Doestoevsky and Pasternak, into my supermarket scenario.  This must be the fault of Reinaldo Arenas, who describes his suffering vividly, alongside the fabulous fun he had.  Russians in literature do party.   They just don’t have fun.

The idea of more, of course, is what Americans are so excited about, and what makes them so sexy and also so repellent.  There are a million situations in which more is a terrible mistake.  It creates shocking amounts of waste.  It also inspires creative people, though.  More, more, more!  Blogs.  Paintings.  Songs.  Nobody needs them.  Still we churn them out, insisting that more will help.  And actually, I think it will.