As many of you know, my favorite methods for having a nervous breakdown include migraines and panic attacks.  Yesterday, with no warning I could note, my bedroom, where I was peacefully watching “The Cat Whisperer” with my cat, became a very frightening place.  Even the bathroom down the hall was much too scary a place to go, in fact, to be inside my body in that moment was so scary I could not take it.  It was too scary to open my eyes, too scary to think about anything I could think about, too scary to not have my cat there, too scary to move, too scary to keep my eyes closed.  Pills.

The headaches make you crazy, coming and going, make you frazzled and worried and worn from pain, and jittery from caffeine, and this tells your nervous system to kick it one notch up and go all the way because clearly my veins are poison and I have to somehow outrun myself.

While I wait for my medicine to work, I watch “30 Rock,” which I always, always find funny, and listen to people yammer on about Disney World on some podcast.  Sometimes I try to do some yoga or meditate, but it’s very, very hard, even though I am in practice from sane moments.

Funny, I had tried to go to a therapy appointment on Thursday.    I did not realize even a cab would take so long to get uptown.  I thought a cab ride would be a luxury, but with my headache, the potholes were just as bad as the bumping on the subway, and anyway, I ended up fifteen minutes late.

I figured out the building was a funny atrium off a big apartment building, climbed some stairs, buzzed a buzzer.  It buzzed back, and I opened the door.  Inside was a black guy sitting next to a lamp.  “Hi,” he said.  “Hi,” I said.  We were surrounded by peachy walls and at least five doors without any labels.  Would the doctor be out to greet me?  Hadn’t she just let me in?  I took out my magazine and tried to read a little.

My migraine was getting stronger, chopping away at a fat noodle-shaped section on the left side of my head.  Over the weeks, it trades off sides, out of politeness, I guess.

There was a shelf with odd old dishes lined up.  There were a few magazines on a table.  The chairs were mismatched.  The ceiling was a little too low.

I thought, as I often have in therapists’ offices, that this was my chance to behave really crazy, do something really, really crazy, but I can never think of anything I want to do.  Jumping jacks?  Scream obscenities?  Interpretive dance?  I wasn’t in the mood for any of that.  (This idea actually applies to the entire city of New  York, if you want to know the truth.)

Five minutes.  I called the therapist.  No answer.  Huh.  I called again.  The guy left his phone and wallet on the table next to him, and went into a room I assumed to be the bathroom.  He was in there a while, though.  He was trusting me, a fellow crazy person, with his thisses and thats?  He was crazy.  I should take his phone and sell it out on 85th Street.  But my head hurt, and I just wanted to go home.

Finally I walked over to the water cooler in the corner, pulled myself a cup of water and grabbed a handful of Cheerios from my bag.  As I had been leaving school that day, someone pulled an extra free breakfast of Cheerios out and handed it to me.  “Can you eat these?”  “Sure,” I said.  I ate two bites of Cheerios and split an Excedrin in half and threw that down with the water.

After migraine-to-panic-attack on Saturday I called my family.  They told me all the healthy things your family should tell you, including, “Every time this happens, no matter how many times it happens, it’s awful.  But it goes away.”

“You could buy yourself a plane ticket,” they also said.  “And you could just come back here.”  My school year is almost over, and I could do that, very soon.  “I don’t want to,” I said.  “I want to be here.” I was surprised I was saying that.

I do love New York more than ever, more all the time, the summer smells of the street, even sweating here, looking for the shady side of the street, and I love that the lady at the shop where I bought safety pins wears a sari, and that the guy who runs the register says to me three times, “Bag?” until I understand and say no.  The comfort of the subway always doing the same thing.  The citiness of it which is more citiness than anywhere in America.  Listening to mom tell her son about why the people in the subway ad are working on a pretend person.  The old guys on Eastern Parkway who sit outside their building at a card table and play dominoes every day after work.  The first spring day I saw them out there, I was so happy, they were my robins.

I didn’t want to leave town, I just wanted to be sane again.

I’ve done this before, this migraine/panic attack cycle, and I’ve gotten out of it before, too.  Mostly it seemed to require patience, until it runs itself out.  This is my brain saying it’s had enough, and it knows I have time to fall apart now. Unfortunately it is right.  Four days of wrapping up at work, and my brain gets a solid two months to go as crazy as it wants.

Did I not do this big thing?  Did I not settle in enough?  Did I not make enough friends?  Did I not invest enough in my new place?  Did I not take good enough care of myself?  Did I go back home too much?  Did I spend enough time in my neighborhood?  Exercising?  Reading?  Writing?  Praying and yoga and stuff?  Was I too brave, or not brave enough?  Should I have been more outgoing?  Was I too outgoing with the wrong people?  How do you actually select your new life, your new friends, your new places, in a new place?  How does that happen?

What does it mean that this is even possible, people getting to know some new and other you when they haven’t had the right to know what you used to think of as the real you?  Although it was definitely not a continuous personality, the you turtle-shell shy fifteen to lazy, secretly mouthy seventeen to devilish twenty-five to half mule/half eagle of thirty-five.

Some time and place is required to let my brain chew on all these questions, and review, as it does in dreams, everything that has happened, what it might mean.  I feel my subconscious is about six months behind my consciousness, most of the time.  Which is what I intended to do some of with the therapist except I was late, and what I can, gentle reader, do here for free.  Tell, and review, or reveal, that I am peacock/cobra now, heavy, delicate, earthbound, defensive, symbol of unrequited love (of various sorts), sharp-tongued, and can I lie?  Liking the plumage. 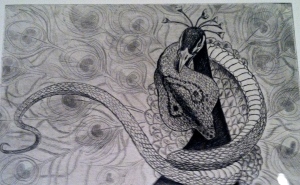 7 thoughts on “Cobra and Peacock”